Owner and breeder who transformed the world bloodstock industry 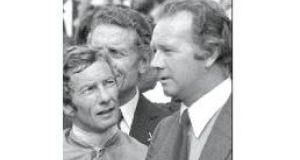 Robert Sangster with Lester Piggot, his most trusted jockey.

Robert Sangster was a leading British racehorse owner and breeder, who in association with John Magnier and Vincent O'Brien revolutionised the world bloodstock industry and transformed Ireland into Europe's foremost producer of thoroughbreds, capable of competing with the previously all-powerful American industry.

At the peak of his success he had hundreds of horses at stud and in training around the world. Horses carrying the Sangster colours of emerald green and royal blue won 125 Group One races. These included the Epsom Derby twice, the Irish Derby four times, the French Derby twice, three Prix de l'Arc de Triomphe, five Irish 2,000 Guineas, three English 2,000 Guineas and one 1,000 Guineas. Lester Piggott was his most trusted jockey, with Pat Eddery a close second.

A low point came in 1983 when Shergar was kidnapped. Sangster, who was insured against the horse's death but not its disappearance, lost his 5 per cent stake.

His breeding interests encompassed 30 studs, chief among them Coolmore in Fethard, Co Tipperary, which he operated with Magnier and O'Brien, and which is now one of the world's foremost breeding operations.

In addition, he had interests in studs in France, the United States, South Africa, Venezuela and Australia.

Robert Edmund Sangster was born in Manchester on May 23rd, 1936, the only child of Vernon Sangster, the founder of Vernons football pools company. He grew up in West Kirby, was educated at Repton and, on completing army national service, joined the family business, which was based near Aintree racecourse.

A keen sportsman, he was a good cricketer and golfer and played rugby for Birkenhead Park seconds. Serving with the Cheshire Regiment, he became brigade heavyweight boxing champion.

He bought his first racehorse, Chalk Stream, as a wedding present for his wife, Christine. The five-year-old gelding won the Liverpool Autumn Cup in 1960 and the Great Jubilee Handicap at Kempton Park the following spring.

By the time he met Magnier, then a 23-year-old stud farmer and a friend of O'Brien, Sangster had developed an interest in the breeding side of racing. With Magnier and O'Brien, he set out to turn breeding into a strictly commercial venture. The "Brethren" (as the trio became known) made it their business to buy all the best yearlings, potential Classic winners that could become top-class stallions commanding enormous fees at stud.

Caerleon and Sadler's Wells (the most successful European stallion of all time) were prime examples of the success of this approach. "Racing is a team game, and I've surrounded myself with the best players available," he said.

O'Brien's instinctive eye for a horse was central to their success, and without him Sangster would not have invested anything like the amount he did in the market.

Due to inherit full ownership of Vernons Pools on his 40th birthday, Sangster avoided paying capital transfer tax by becoming a tax exile. Initially he rented a villa near Marbella and later purchased a vast mansion, The Nunnery, on the Isle of Man.

In 1975 at the prestigious Keeneland Sales in Lexington, Kentucky, he paid just under £1.8 million for a collection of young thoroughbreds that included a colt by Northern Dancer out of Fleur that became known as The Minstrel. With the success of The Minstrel in the 1977 Epsom Derby, Sangster joined the top flight of racehorse owners.

A second Derby win followed in 1982, with Golden Fleece, and during the years 1977-84 Sangster was Britain's leading owner five times. His horses at this time included Durtal, Jaazeiro, Lomond, Gildoran, Godswalk, Thatching, Solford and Sookera, as well as the champion two-year-olds Monteverdi, Storm Bird and Try My Best. In 1980 he achieved a long-held ambition by winning the Melbourne Cup, with Beldale Ball, and he scored with Royal Heroine in the 1984 North America Breeders' Cup.

Sangster's achievements as an owner helped to attract new money into the thoroughbred business, and serious players like the Saudi businessman, Khalid Abdullah, and the Maktoum royal family of Dubai were drawn into the yearling market. Welcoming the arrival of Arab money, Sangster believed it would increase the value of his own holdings.

However, he and his associates found themselves engaged in bidding wars with the newcomers, and the yearling market became ludicrously inflated. The rival camps finally saw sense and agreed not to bid against each other. This in turn caused a slump in bloodstock values, but Sangster emerged relatively unscathed.

In 1984 he purchased the Manton stable in Wiltshire, installing the National Hunt trainer, Michael Dickinson, to run it as a private establishment. But winners were few and far between, and Dickinson was sacked. "We're all allowed a mistake in life," Sangster said philosophically.

Ever the optimist, in 1987 he set up, with Michael Smurfit and Vincent O'Brien, Classic Thoroughbreds, to raise money to purchase more yearlings. And while Royal Academy did win the 1990 Breeders' Cup Mile, the venture did not enjoy much success.

The sale in 1988 of Vernons Pools ensured that Sangster's personal fortune remained intact. His final Classic success came in 1992 when Rodrigo de Triano won the 2,000 Guineas at Newmarket. In the 1990s he saw his breeding investments pay off handsomely, even if meant watching horses that once were his win Classics in other owners' colours.

He liked the high life. His box at Royal Ascot, where guests were treated to champagne and baby lobster, overlooked the parade ring. When not travelling by private plane, he flew by Concorde. And his dates included the model Jerry Hall and author Pat Moss.

He was married, and divorced, three times. His five sons and a daughter survive him.

Mother and baby homes: it ‘may be impossible’ to identify all remains 06:44
Police officer who shot Daunte Wright to appear in court 06:40
No higher taxes, Hostelworld’s investor and Deka buys another building 06:30
Simon Zebo is heading back to Munster next season 06:12
DCU rolls out e-scooter scheme on its campuses 05:30