Watch out Babe, here’s Honky, the pig that thinks she’s a dog

Co Meath animal ‘quacks like a duck, wags her tail like a pup, and spins till she falls over’

Margaret Griffin raises pigs for herself and a few customers in Moynalty, Co Meath. One of her pigs will not end up as sausages and rashers however. Honky is a pig that thinks it's a dog and has become the family pet. Video: Bryan O'Brien 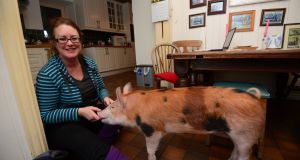 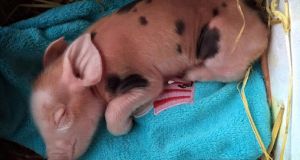 Honky the pig when she was born. Photograph: Margaret Griffin

When actor James Cromwell played a pig’s best friend in the 1995 hit film Babe, he announced afterwards that he was an “ethical vegan”.

Co Meath smallholder Margaret Griffin isn’t quite sure if she is at that stage yet, but one of her animals will not be making anyone’s lunch.

Honky Tonk may look like a pig, but – as with the hero of Dick King-Smith’s novel and the subsequent film – she has other ideas about herself.

She quacks like a duck, wags her tail like a pup, and spins till she falls over when she is happy.

“Even when she was small, she would come when I called her name,” Ms Griffin laughs. “She likes to sleep in the dogs’ bed, and to curl herself around the kittens.”

Honky, as she is known for short, was one of a litter of 12 piglets all rejected by their mother after they were born in late August on the Griffin farm in Moynalty.

“I brought them in and bottle fed a number of them – a bit like Arthur Hoggett when Babe was ill,” Ms Griffin says, recalling how the fictional farmer was smitten with the runt he won as a prize in a country fair.

“Honky had scour, and so I put her in a box and syringed water down her throat,” she says. “One of the 12 didn’t make it, unfortunately, and Honky was completely paralysed and I thought she might have to be put down.”

Ms Griffin, who is an agricultural science graduate and qualified in food safety, began giving the litter solid food at two weeks. Honky began to perk up and take milk.

“I would torment her with the bottle, and I remember she would start honking when she heard the microwave going – hence her name,” she says. “She refused to eat herself, and would only take hand-feeding from me.”

“I decided to put her siblings out on the vegetable patch,” Ms Griffin recalls, but when Honky was encouraged to join them she would get knocked over and bitten. “She would start screaming, and I’d have to run out and rescue her!”

As with Babe, who befriended the collies on the Hoggett farm, Honky endeavours to impress Ms Griffin’s three Jack Russell dogs.

“She runs in to greet them in the morning, she tries to bark, wags her tail and bum, and if I throw a ball she runs after it – but thinks she has to catch the dogs, ” Ms Griffin says.

“They just about tolerate her – giving her a sly snap every now and then – but she does try to rob their food,” she says.

The “Honky happy dance” had Ms Griffin in stitches when she witnessed it first.

“She turns around in repeated circles, gets dizzy and flops to the ground,” she says.

Ms Griffin grows fruit and vegetables and rears animals organically for market. She sold some of Honky’s siblings but kept five back.

“I am not sure about parting with them, because I did bottle-feed them from birth, can tell them all apart and know their personalities,” she says. “And Honky makes me laugh every single day.”

Ms Griffin admits that she even sang If I had Words – Farmer Hoggett’s song to his “sheep-pig” adapted from the Saint-Saens Symphony No 3 in C minor – to Honky earlier this week.

This not-so-little piggy won’t be going to the market any time soon.