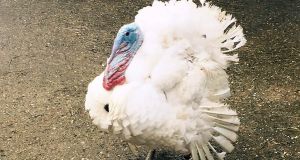 A turkey that narrowly dodged becoming Christmas dinner is looking for a new home as a family pet.

Destined to end up on a dinner plate, Turkules miraculously managed to survive being shot in the head with a bolt gun.

He was then loaded on to a holding lorry, along with 15 tonnes of other dead birds, and sent to a farm in the UK, ready to be sold on to customers.

But much to the amazement of staff, the plucky bird popped up his head.

Taking pity on him, and not wanting to cause him any more distress, the farmer took Turkules under his wing — keeping him warm, fed and watered.

He even spent the festive period following the farmer around.

But with a lack of space to properly care for the turkey, the farmer took him to the Wood Green animal shelter in Godmanchester, Cambridgeshire, in the hope he can find a permanent home.

The UK national charity cares for and rehomes thousands of dogs, cats, rabbits, hens and ferrets every year — with Turkules an unusual addition.

“Turkules is such a character and he seems completely unfazed by his escapade. We would love to find him a new home where he has secure space to roam and enjoy his freedom.”

People looking for more information on Turkules and the charity can visit woodgreen.org.uk.

0:46 Trump: 'Our hearts go out to the people of Wisconsin' after brewery shooting