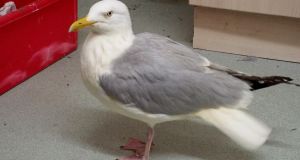 Businesses should use a “repulsive spray” to prevent seagulls tearing apart plastic bags of rubbish left out for collection in Dublin city centre, Fine Gael Senator Paul Coghlan has said.

Speaking in the Seanad, Mr Coghlan said some solution would have to be found to the problem of gulls pulling rubbish from plastic bags.

In order to prevent the gulls creating a mess, he said a form of “repulsive spray” should be found or businesses should use wheelie bins.

Mr Coghlan said he witnessed seagulls tearing apart plastic bags left out by businesses on the top of Dawson Street and at the corner of St Stephen’s Green.

“These gulls seem to have a voracious appetite and wreak havoc with their beaks,” he said.

“And unlike other birds they don’t seem to understand bedtime. This was late enough.”

Mr Coghlan said he wanted “advice for business owners putting out bundles of plastic bags . . . [The birds would] hardly move out of your way. They’re perched on ledges ready to swoop.

“And then you’ve litter strewn all over the place. And we’re talking about bin charges and management of waste.

“This is terrible in our capital city.”

The leas-chathaoirleach of the Seanad said: “Maybe some repulsive spray must be found to spray if they’re going to continue to put out these plastic bags, or maybe they should be encouraged to use wheelie bins because the plastic bags are leaving litter all over the place.”

He said it was disgraceful to have this litter as “tourists walk around the place after 11” at night.

Previously, Fianna Fáil Senator Ned O’Sullivan had told the Seanad that seagulls “have lost the run of themselves completely”, and described them as vermin and scavengers.

He said they were raucous and kept people awake.

Last year, Fianna Fáil’s Denis O’Donovan called for a cull of seagulls, saying they were “endangering society” and “invading towns”.

He had referred to comments by British prime minister David Cameron about the need for a “national conversation” about gulls, following reports that they had attacked and killed a pet tortoise and a terrier dog in Cornwall, England.

Mr O’Donovan said: “Their behaviour is coming to the stage, to be realistic now, it’s like a rabbit with myxomatosis or a cow with mad cow disease.”