Canadian pop star Justin Bieber drew the crowds to Bushy Park in Terenure, Dublin when he and his entourage dropped in to shoot some hoops on the park's basketball courts. Video: Stephen Brian Lowe & I Love Terenure/Facebook 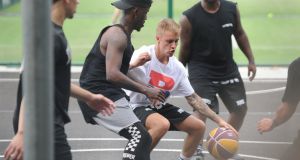 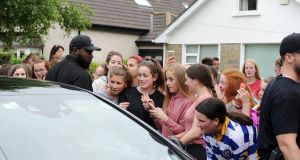 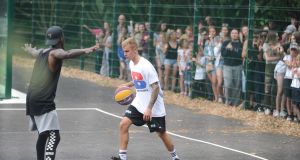 Canadian popstar Justin Bieber brought some showbiz to a normally tranquil Bushy Park in south Dublin on Tuesday when he dropped in to shoot hoops with his entourage.

Ahead of his concert in the RDS in Dublin on Wednesday night, Bieber enjoyed a game of basketball with members of his travelling crew.

Fans took to social media to share pictures and videos of the the star playing in the Terenure park.

Guess who was in Bushy park this evening? pic.twitter.com/Mzw3rNGoJZ

Went for a run in Bushy park and bumped into @justinbieber 🤔 very random! He did chat to me though. #BFF pic.twitter.com/gfFxXf7wDG

Guess who was in Bushy park this evening? pic.twitter.com/Mzw3rNGoJZ

When Bieber and his entorurage went to leave, they got stuck for 20 minutes on Rathdown Avenue and hundreds of excited fans - a small fraction of the star’s global army of “Beliebers” - gathered around his car.

“He didn’t roll down the window or engage with the fans but, to be fair, there were hundreds of them and they were all a bit excited,” said one eyewitness.

Earlier on Tuesday, Bieber was spotting having a bite to eat in in Picadero’s Spanish restaurant in Maynooth Co Kildare.