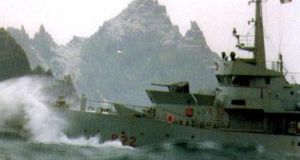 A Norwegian couple are today recovering in West Cork after they were saved from a damaged yacht foundering off the Irish coast.

Erik (62) and Gretta (62) Ostberg from Haugesund in Norway spent three days stranded in the Atlantic after raging seas damaged their yacht, the Alice II.

The 10-metre wooden yacht lost its main mast and a spar from its bow used to anchor the main sail when it was hit by heavy seas.

The couple were unable to issue a May Day alert to get assistance as the yacht lost its VHF radio antenna on Monday when the main mast fell.

The incident happened some 250km off Mizen Head as the couple were on their way from the Azores to the Hebrides on their return voyage home to Norway.

They eventually used flares to highlight their distress and they were spotted by the French trawler, Bikain who tried to get a tow rope aboard the stricken yacht.

However, the couple were so exhausted they were unable to pick up the tow rope and the trawler came alongside and put a crew member on board to assist them.

The French trawler escorted them to the Naval Service vessel LE Aoife.

Two members of the Naval Service went aboard the stricken yacht which was then taken under tow to Castletownbere in a journey that took two days.

The RNLI Lifeboat brought the couple m ashore where Mrs Ostberg was treated for mild shock.

Last night, the couple expressed their gratitude to all involved in their rescue, particularly the Irish Naval Service who towed them for two days.

“We are very happy to be ashore. We were very worried when the mast came down,” said Mr Ostberg. “We would like to thank everyone and we are especially grateful to the Irish navy. I do not know what we would have done without them. They were very, very kind.”