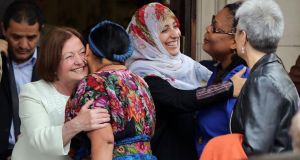 Ireland must never again allow its airports to be used as stop-offs for the US military or secretive rendition flights, Nobel laureate Mairead Maguire has said in Belfast ahead of an international peace conference.

Ms Maguire (69) was yesterday launching the biennial conference of the Nobel Women’s Initiative, which is taking place in the United Kingdom for the first time. The conference will have more than 100 delegates, including five other female Nobel peace prizewinners, at the Culloden Hotel from today until Thursday.

The anti-war campaigner said Ireland must uphold its neutrality and stop “allowing millions of American soldiers to pass through Shannon Airport as it did during the Iraq War. The Iraq War was an illegal and an unjust war,” she said.

“The Irish Government has a very good reputation abroad ... but it has to be above scrutiny, as does every government when it comes to ensuring the protection of human rights.”

She hoped the Belfast conference, Moving Beyond Militarism And War, would “promote women-led solutions. We need to stop the whole belief that militarism and paramilitarism solve anything.

“Belfast is a perfect example,” she continued. “In the 1970s, women formed 90 per cent of the Peace People movement and we eventually did see the end of conflict, although there is still a lot of work to be done in terms of implementing the Good Friday Agreement.”

Along with Betty Corrigan, Ms Maguire was a joint winner of the Nobel peace prize in 1976.

Among the other Nobel laureates attending this week’s conference are American anti-landmine campaigner Jody Williams, Liberian activist Leymah Gbowee; and the first indigenous person to receive the prize, Rigoberta Menchu Tum from Guatemala.

Personal injury guidelines could pave way to cheaper insurance 00:01
Data watchdog close to decisions on fines in up to seven ‘Big Tech’ investigations 00:01
Mother and baby homes: Complaints made over handling of testimonies 00:01
Mental health centres found to be unsuitable after ‘years of neglect’ 00:00
Both main presidential candidates claim victory in Niger 23:26