Next apology will be to asylum seeker children, warns former judge

Up to 300 march to demand an end to direct provision

Asylum seekers, refugees and human rights supporters marched from the Dail to The Department of Justice on Stephens Green today to protest as part of a national day of action to end Direct Provision living for Asylum Seekers. Report: Jason Kennedy 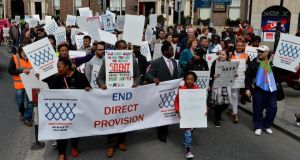 Asylum seekers, refugees and human rights supporters march from the Dáil to the Department of Justice in Dublin yesterday to protest as part of a national day of action to end direct-provision living for asylum seekers. Photograph: David Sleator/The Irish Times

The Government will end up apologising for the damage done to children living in centres for asylum seekers, retired Supreme Court judge Catherine McGuinness has warned.

The system whereby families had to live in one room, were unable to cook for themselves and with adults not allowed to work was “highly damaging for children”, she told a demonstration outside the Department of Justice this afternoon.

Up to 300 people marched from the Dáil to the department where they handed in letters from children pleading with Minister for Justice Alan Shatter to end the system, known as direct provision, which makes asylum seekers dependent on the State for everything.

Ms McGuinness said a challenge to the system following the referendum on the rights of children was “something people could look at”. But she added: “I would much prefer to see him [Mr Shatter]moving in a positive direction... rather than being chased through courts.”

Between €600 - 700 million had been spent on running the centres and hostels for asylum seekers which was “privately run on a for-profit basis” and which enforced segregation between asylum seekers and the rest of society, she added. Ireland should sign up to an EU – which only Denmark has also failed to adopt – which sets minimum standards for living conditions.

Ireland was the only EU country which imposed such a system on asylum seekers for their entire stay and the only state which refused to allow them to work, said Sue Conlon, chief executive of the Irish Refugee Council. “This is about saying enough is enough, it has to end,”Ms McGuinness told the crowd.

While an Opposition TD Mr Shatter said the system should be reviewed.