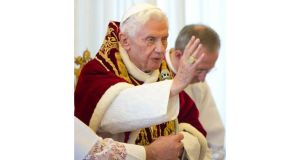 Pope Benedict XVI blesses cardinals during the consistory at the Vatican today at which he announced his resignation. Photograph: Reuters

A new pope will probably be elected by the end of March, a Vatican spokesman said today, after Pope Benedict left his aides "incredulous" with his announcement that he would resign because he was too weak to fulfill the duties of his office.

Up to 120 cardinals will take the momentous decision over who will next lead the millions of Catholics around the globe. The influential College of Cardinals will meet in Rome and choose Pope Benedict XVI’s replacement in a tradition dating back almost 1,000 years.

Benedict said he would step down on February 28th and would not take part in the conclave to elect a new pope, Father Federico Lombardi told reporters today at the Vatican.

After resigning, the former pope will move to a summer residence near Rome. After that, he will live in a former monastery within Vatican territory, Lombardi said.

Bookmaker Paddy Power suggested Ghanaian Cardinal Peter Turkson is the favourite to become the next pope.

The leading Latin American candidates for the papacy seem to be Odilo Scherer, archbishop of the huge diocese of Sao Paolo, or the Italian-Argentine Leonardo Sandri, now heading the Vatican department for Eastern Churches.

About half the cardinals who can vote are from Europe, even though only a quarter of the world's Catholics live there. If the conclave tilts to the Old Continent, Vatican watchers say Angelo Scola of Milan is in pole position.

Pope Benedict is to resign two months before his 86th birthday for health reasons after serving for almost eight years. "After having repeatedly examined my conscience before God, I have come to the certainty that my strengths, due to an advanced age, are no longer suited to an adequate exercise of the Petrine ministry," the pontiff said.

The frontrunners for pope

Joao Braz de Aviz (Brazil, 65) brought fresh air to the Vatican department for religious congregations when he took over in 2011. He supports the preference for the poor in Latin America's liberation theology, but not the excesses of its advocates.

Possible drawbacks include his low profile.

Timothy Dolan, (USA, 62) became the voice of U.S. Catholicism after being named archbishop of New York in 2009. His humour and dynamism have impressed the Vatican, where both are often missing. But cardinals are wary of a "superpower pope" and his back-slapping style may be too American for some.

Marc Ouellet (Canada, 68) is effectively the Vatican's top staff director as head of the Congregation for Bishops. He once said becoming pope "would be a nightmare." Though well connected within the Curia, the widespread secularism of his native Quebec could work against him.

Gianfranco Ravasi (Italy, 70) has been Vatican culture minister since 2007 and represents the Church to the worlds of art, science, culture and even to atheists. This profile could hurt him if cardinals decide they need an experienced pastor rather than another professor as pope.

Leonardo Sandri (Argentina, 69) is a "transatlantic" figure born in Buenos Aires to Italian parents. He held the third-highest Vatican post as its chief of staff in 2000-2007. But he has no pastoral experience and his job overseeing eastern churches is not a power position in Rome.

Odilo Pedro Scherer (Brazilia, 63) ranks as Latin America's strongest candidate. Archbishop of Sao Paolo, largest diocese in the largest Catholic country, he is conservative in his country but would rank as a moderate elsewhere. The rapid growth of Protestant churches in Brazil could count against him.

Christoph Schoenborn (Austria, 67) is a former student of Pope Benedict with a pastoral touch the pontiff lacks. The Vienna archbishop has ranked as papal material since editing the Church catechism in the 1990s. But some cautious reform stands and strong dissent by some Austrian priests could hurt him.

Angelo Scola (Italy, 71) is archbishop of Milan, a springboard to the papacy, and is many Italians' bet to win. An expert on bioethics, he also knows Islam as head of a foundation to promote Muslim-Christian understanding. His dense oratory could put off cardinals seeking a charismatic communicator.

Luis Tagle (Philippines, 55) has a charisma often compared to that of the late Pope John Paul. He is also close to Pope Benedict after working with him at the International Theological Commission. While he has many fans, he only became a cardinal in 2012 and conclaves are wary of young candidates.

Peter Turkson (Ghana, 64) is the top African candidate. Head of the Vatican justice and peace bureau, he is spokesman for the Church's social conscience and backs world financial reform. He showed a video criticising Muslims at a recent Vatican synod, raising doubts about how he sees Islam.