Merkel unusually blunt on Anglo tapes: ‘I have nothing but contempt’ 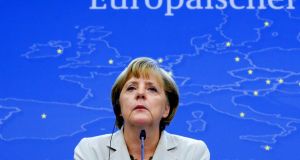 Angela Merkel was a woman on a mission when she strode into a Brussels briefing room at 1am yesterday.

After hurrying through her talking points, the floor was opened to questions and Anglo Irish Bank was on the summit agenda. What did she think of the Anglo tapes: the tone, the disparaging references to Germany, the singing of the national anthem?

In unusually blunt language Dr Merkel answered without hesitation: “I have nothing but contempt for this. For people who go to work every day and earn their money, it is very, very difficult to understand, if at all,” she said, responding to a question from The Irish Times.

Furious flight
For anyone used to the reserved German leader and her often anodyne answers, it was remarkable to watch her at close range in full furious flight.

The kind of banker talk like that on the Anglo tapes “does real damage to democracy”, she said, and makes it harder for politicians to convince people to get up, go to work, pay their taxes and “show solidarity with people who are weaker. All of this is destroyed by that”.

She suggested the arrogant banker tone was not uniquely Irish, citing The Raspberry Kingdom, a play running in Berlin based on post-crisis interviews with bankers in Frankfurt, Dublin and other financial capitals.

Banker anecdotes
In the play, sold-out for months at the Deutsches Theater, actors relate banker anecdotes about privatising profit, socialising risk and avoiding every law along the way.

“Nobody is above the law except us,” one banker told playwright Andres Veiel. “We own the bank, the board, the laws . . . it’s a joke.”

Dr Merkel’s early-morning intervention in Brussels ensured that anyone in Germany who had missed the Bild front-page story on Anglo the day before was soon up to speed.

“They made fun of EU assistance and mocked Germany,” noted the Sueddeutsche Zeitung daily, one of dozens of reports yesterday. “Now Chancellor Merkel has delivered strong criticism of the remarks.”

Unusually strident
The correspondent from Spiegel Online website found it interesting that it “didn’t take long” for the German leader to deliver an unusually strident answer.

“Angela Merkel is in election campaign mode. Thus she may have thought she can be a bit more direct, particularly when it’s to do with unscrupulous bankers.”

Regardless of her motivation, the German leader’s Brussels broadside set the tone for the Taoiseach to follow the next morning.