State papers: Holiday group told they were ‘not welcome on Achill’ 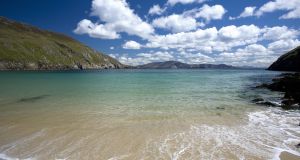 Keem Strand on Achill Island, Co Mayo: 73 members of the Junior Soldiers Company of the North-Irish Brigade in Ballymena had planned a week-long stay in August 1964. The adventure camp was to include swimming, climbing, canoeing and water skiing. Photograph : Design Pics / Gareth McCormack

Word gets out that a group of people are planning to come to Achill. They get the message they are not welcome, and the plan is aborted. Sounds familiar? Except this happened 55 years ago and it involved a group of young British soldiers.

Declassified State papers show that 73 members of the Junior Soldiers Company of the North-Irish Brigade in Ballymena were planning a week-long stay in Keem, Achill Island, from August 8th, 1964. The adventure camp was to include swimming, climbing, canoeing and water skiing. Previously, the company of soldiers aged between 15 and 17 held their annual camp in the UK but the organisers said they felt like going somewhere different.

Reports began appearing in the newspapers a week before they were due to travel, with references to convoys of army lorries crossing the border. Anti-British and IRA slogans appeared on roads and bridges in Achill and Seán Caughey of the Republican Publicity Bureau in Belfast sent a telegram of protest to Ballymena. It read: “You and your command are not welcome in Ireland. Suggest you go home.”

The British army cancelled the visit three days before the group was due to arrive. An Irish official said the British ambassador Sir Geofroy Tory had called to let him know of the cancellation. “The ambassador said that he had been consulted in the matter and while they had been encouraged by the reaction of responsible people in Achill, he had advised cancellation of the boys’ holiday in Achill for fear that the boys’ holiday would be spoiled by incidents and also to save any possible embarrassment to us.”

The Achill Tourist Association said it sincerely regretted the decision. Its secretary Harold McDowell was quoted in this newspaper saying: “A few extremists have been responsible for these slogans. They are definitely not from Achill. In fact, we think it was the work of a party of Republicans from the six counties.”

On foot of the controversy, a senior official in the Department of External Affairs (now the Department of Foreign Affairs) wrote to his counterpart in the Department of Transport, saying a transport plan for the excursion seemed to have come from discussions between the British army and Bord Fáilte. “My minister thinks you should ask Bord Fáilte to try to ensure that any schemes touching on sensitive political fields will in future not be embarked upon without prior political approval,” he wrote.

The senior Department of Transport official said his minister had taken the matter up with Bord Fáilte. “He has requested the chairman of the board that in future he should be consulted when travel is arranged for persons of any group likely to be the subject of controversy even by a very small and unrepresentative section of the population.”

The files record Bord Fáilte’s account of the controversy. Its marketing executive, who was trying to foster tourism from Northern Ireland, explained the group had sought a quotation to hire two CIÉ buses to transport the teenagers, but the figure was “out of the question”. He then asked the Department of Defence to provide military lorries to transport the boys from the border to Mayo. The department refused and the British embassy then agreed to arrange transport on a military lorry, stripped of its military insignia, if it was acceptable to the Irish government.

A Department of External Affairs official said he told the Bord Fáilte executive that taking military lorries belonging to the “Occupation Forces” into the Republic was a “sensitive one” and he had been “somewhat hasty in teeing up the British military lorry idea without first clearing the political aspects with the department”.

The Bord Fáilte official said he expected there would be no publicity about the visit unless some reporter should hear about the story after the group reached Achill.

The boys, who enlisted at 15, were trained as band musicians for two years before joining regiments. According to newspaper reports, several were from the Republic.

The holiday camp was held in Ballycastle, Co Antrim, instead.