Policing of 1986 protests ‘inadequate at best and collaborative at worst’ 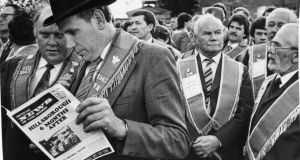 Loyalists taking part in the Orange Order protest rally in March 1986 against the signing of the Anglo-Irish Agreement. Photograph: Matt Kavanagh

The RUC’s policing of loyalist protests in 1986 against the Anglo-Irish Agreement was “seen to be inadequate at best and collaborative at worst”, a Northern Ireland Office report concluded.

“The scale, extent and apparent effectiveness of intimidation; and the perceived refusal of the RUC to take appropriate steps to prevent intimidation or obstructions” were raised in a report drawn up by anofficial in the Northern Ireland Office’s political affairs division, dated March 5th, 1986.

The report is among the large number of official files from 1986 released in Belfast today.

It describes intimidation on the protest day as widespread and taking a variety of forms. “Pickets took note of the registration numbers of cars whose drivers crossed their lines” while cars were “kicked and their occupants abused”.

On the alleged inactivity of the RUC, it noted: “Reports from all parts of NI and from a wide range of sources complain of inactivity on the part of the RUC when faced with physical barricades, picket lines or cases of manifest intimidation.

“These reports [were] . . . brought to national attention by media coverage, notably of a civil servant haranguing a police officer for failing to assist him in entering the Stormont estate and of what appears to be an RUC Landrover [sic] being driven out of the way in order to allow a tractor and trailer to block a road.

“There had been allegations the RUC watched barriers being built without intervening; that the main Belfast-Newry road was allowed to remain blocked for five hours despite the presence of police, including senior officers . . . that the RUC were under instructions not to interfere with “official picket lines” and that people attempting to cross them . . . received no RUC . . . protection.”

The official felt unionist party leaders James Molyneaux (UUP) and, to a lesser extent Ian Paisley (DUP) may also have been taken aback.

He continued: “It is clear that they had no control over the way in which the day of action was organised or run.”

Mr Molyneaux’s words that “there must be no violence” now had a hollow ring.

“Although it was reasonably successful in achieving its aims, though only because of the use of intimidation, many are saying that it has told the Northern Ireland Office and the government nothing that they did not know.

“There is genuine concern from many quarters about the behaviour of the RUC, which was seen to be inadequate at best and collaborative at worst.”

Citing his own experience of the failure of the police to remove illegal roadblocks in Co Tyrone, Denis Haughey of the SDLP described it as a “bad day for the police”, according to a report by J Alford of the Northern Ireland Office in March 1986.

“Not only were the police considered to be at worst collaborating and at best complacent,” there was a strong army presence in Catholic areas of Derry. “Thus the view is that the army are there to supervise the minority while the police deal with the majority and then only in a token sense.” Dr Éamon Phoenix is a political historian and principal lecturer in history at Stranmillis University College, Queen’s University, Belfast. He is the author of Northern Nationalism: Nationalist Politics, Partition and the Catholic Minority in Northern Ireland 1890-1940 and a member of the Taoiseach’s advisory committee on centenaries