Windfarm locals must be given energy policy role, White says 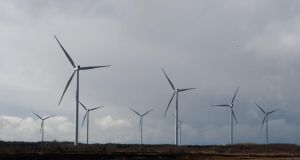 Minister for Energy Alex White has said that local people affected by windfarms must be given a ‘genuine stake’ in energy policy decision-making for Ireland to meet its targets on renewable energy. Photograph: Dara Mac Dónaill/The Irish Times

Local people affected by the erection of windfarms must be given a “genuine stake” in energy policy decision-making if Ireland is to succeed in meeting its renewable energy targets, the Minister for Energy Alex White has said.

Mr White said the issue of consultation will be addressed in the White Paper on energy policy which is being prepared for publication later this year.

Speaking at the annual conference of the Irish Wind Energy Association (IWEA), Mr White said wind was now generating 16.5 per cent of all electricity demand in Ireland, but there was “quite clearly plenty more to do” if Ireland was to reach the EU target of having 40 per cent of electricity generated from renewables by 2020.

Mr White said the majority of Irish people are concerned about global warming and welcome the idea of a cleaner energy system.

However, Mr White also noted the “deep concerns” of local people about the effects that wind turbines will have on their lives.

Mr White said: “It is up to us . . . that our citizens have, and feel that they have, a genuine stake in our energy future.

“It is up to us, Government, industry and advocates, to make this happen by maximising the opportunities for citizens to participate in the transition to a carbon-free future.”

Mr White said it was important to locate wind turbines in areas that are compatible with the environment.

A survey carried out on behalf of the industry found that 70 per cent of Irish people either agree or strongly agree that wind energy contributes positively to the national economy.

Some 30 per cent neither agreed nor disagreed with the proposition, while 7 per cent either disagreed or strongly disagreed.

Some 69 per cent agreed that wind energy has a positive impact on the environment, while 81 per cent of respondents believed it was important for Ireland to have its own secure source of energy.

The survey was carried out by Empathy research based on a representative sample of 1,093 Irish adults.

A report commissioned by IWEA in relation to the benefits of wind energy stated that each house would be €26 better off every year if Ireland meets its renewable targets by 2020.

The report found that new data centres, such as the one being built in Athenry, Co Galway by Apple, could increase electricity demand in Ireland by 900 megawatts a year.