‘Wild Sky’ shows the Rising was not confined to Dublin 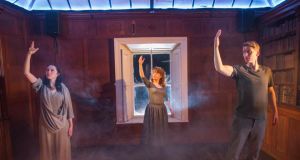 A single line uttered by a character bewildered by the chaos of the 1916 Easter Rising conveys the turmoil, excitement and defiance depicted in a new play commissioned by Meath County Council arts office to mark this centenary year.

A young Slane man, Tom Farrell, becomes involved in the fighting in the GPO in Dublin, not out of nationalistic idealism but to impress a girl. “I’ve sleep-walked into history,” he says on finding refuge in a nearby tenement room where a woman has been killed in full view of her young son.

Deirdre Kinahan’s intense, collage-type vortex Wild Sky, which takes its title from Slane poet Francis Ledwidge’s haunting Lament for Thomas MacDonagh, looks to the emerging radicalisation of a generation and how it coalesced in a rebellion that, although initially viewed as a symbolic failure, would culminate in the War of Independence.

The premiere of Wild Sky was staged on Friday in the library of Rossnaree House in Slane, not far from the birthplace of Ledwidge who, having survived action in Gallipoli and Serbia, died at Ypres in 1917.

Rossnaree House was an effective setting. The 19th century villa has many historical resonances and reflects the various traditions.

It was a British army house and overlooks the landscape over which much of the Battle of the Boyne was fought. Newgrange is also visible.

When Farrell making his way back to Slane refers to the Boyne – “Finally I could see it . . . as it broke out free from the green and swung on into the valley. It seemed to welcome me home.” – the actor has a view of the river through the library window.

In spite of the British military connection, the Law family always had a strong interest in Irish history and the Irish language, and a portrait of Maud Gonne, Stuart’s great-grandmother hangs in the library.

Layers of Irish history and references to places in Meath are present throughout the play, although it is a tale of doomed romances. Apolitical Farrell – “bred for emigration” – is in love with Josie, who is in turn besotted by a local poet, Mikey Lowry, who chooses politician John Redmond over her “and joined the wrong army”.

It is about cultural identity and a dawning belief that change is possible. It also highlights the role of women activists who were becoming involved on many levels, including risking arrest by distributing anti-recruitment leaflets on the streets of Dublin.

Young Josie Dunne, the granddaughter of an old Fenian, quickly moves on from Irish dancing and embracing the Irish language, which had begun thanks to a zealous schoolteacher from Kilberry, mid way between Slane and Kells.

Dunne’s reference to the “Gaelic Leaguers in Oldcastle” makes it clear that new opinions were extending throughout the county.

Kinahan sets out to stress that the Rising was not confined to Dublin and there is an important reference to Ashbourne and the hold-up at Rath Cross, which would prove significant as it was successfully conducted by the volunteers in a guerrilla-style of warfare later used throughout the War of Independence.

Ledwidge’s patron Lord Dunsany is mentioned as is the poet’s friend and fellow poet, Katharine Tynan.

Local people in the audience knew the topography as well as the history. Many were touched on hearing Philip Clarke described as: “Husband. Father. Worker.” He was a member of the Citizen Army and the only man from Slane who died in action during Easter Week, on April 26th. He was 41.