Wheels of Cork’s bike-share scheme are set in motion 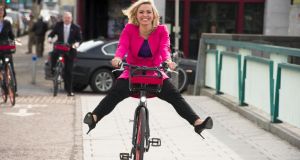 Camogie star Anna Geary tries out a bicycle after the opening of the final station of the Cork city bike scheme. photograph: Michael Mac Sweeney/Provision

The largest bike-share scheme outside Dublin has been launched in Cork with Minister for Agriculture Simon Coveney officially opening the new bike station at City Hall. It is the last of 31 stations to go live in the bike hire scheme in the city.

The roll-out, which commenced in December, sees 330 bikes available for public hire across the 31 stations, which are located throughout Cork from Kent Station to Gaol Walk and from Griffith College to the College of Commerce.

So far, more than 2,500 people have registered for the Cork scheme.

Mr Coveney said the scheme would have an impact on promoting sustainable transport in the city, supporting a reduction in carbon emissions.

“We have already seen the bikes around the city since the first number of stations launched in December and the completion of the roll-out of the scheme in Cork will offer people another option for the commute.”

In May last year, the Rothar Nua consortium was awarded the contract for the provision of public bike schemes in Cork, Limerick and Galway by the National Transport Authority.

The schemes received capital funding of €5.1 million from the Department of Transport, Tourism and Sport.

A partnership with Coca-Cola means an investment of almost €3 million over five years. The annual subscription for the Cork scheme is €10 and more information is available at www.bikeshare.ie.