What Richard has to do

Can a US diplomat solve the North’s most intractable problems before Christmas? 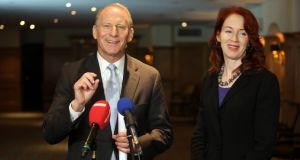 Dr Richard Haass flies into Northern Ireland on Monday in the hope of flying out on Friday week with a Christmas deal wrapped on the issues of the past, parades and flags. But the US diplomat and his assistant, the Harvard professor Meghan O’Sullivan, must know that Santa Claus doesn’t work for adults.

The question is how to break through the distrust among the North’s political parties, which Haass is trying to coax into another historic agreement.

The general mood in Northern Ireland seems to be that it’s best not to anticipate too much – a feeling reflected in the observation of First Minister Peter Robinson that “there is progress that can be made in all three areas, more in parades than in flags, and more in flags than in dealing with the past”.

But these talks are expected to at least deliver a road map. So let’s examine the prospects.

It’s a year since Belfast City Council voted to restrict the days the Union flag should fly over City Hall. Protests, violence and disorder flared, wrecking a lot of Belfast Christmas business and shaking political stability. It seems feasible that Haass and the parties could devise general protocols on flying flags, but would anybody observe them?

In advance of his return on Monday, Haass set the parties some homework, including the question of whether it would be possible to devise a new generally acceptable flag for Northern Ireland. The answer from unionism was an emphatic No.

On parades, the independent Parades Commission is the whipping boy mainly of unionists, who regularly call for its disbandment, but also occasionally of nationalists. It has been proposed that local politicians have a greater say in how parades decisions are made, but would any politician with that power have the temerity to go against his or her own community, even if their decision would lead to serious trouble?

The reaction to Attorney General John Larkin’s proposals on the past – that there should be no further prosecutions or investigations into Troubles killings before April 1998 – appears to demonstrate the accuracy of Robinson’s view that this will be the most obdurate problem. Even if some mainstream politicians privately agree with Larkin, they have had the wit not to say so. Haas described the response as instructive. The past is the most intractable of the three problems.

What was lost in some of the initial discussion was the balanced aspect of Larkin’s proposal. He spoke about an effective amnesty from acts of violence in the past and proposed that protagonists from all sides would divvy up the truth.

In terms of providing access to the truth for victims of the conflict, Larkin said, “There should be a huge public facilitation of access to state records, above and beyond what is currently available under freedom-of- information legislation.”

Larkin made clear that his proposal would have consequences for British and Irish governments in terms of legislation, because the “theatre of the Troubles extends beyond this jurisdiction”.

The search for truth can be a subjective business. Sinn Féin talks about an independent international truth commission, but would former IRA members tell it the truth? Judge Peter Smithwick effectively found that the three IRA members who made a statement to his tribunal into the killings of Chief Supt Harry Breen and Supt Bob Buchanan were self-serving and did not disclose the full truth. And if Gerry Adams persists in saying he was never in the IRA, why would anyone believe anything he or other republicans would tell such a body?

When Anne Cadwallader in her book Lethal Allies provided empirical, frequently police- investigated evidence of RUC and British army collusion in 120 killings in mid-Ulster in the early to mid-1970s, unionists were dismissive or silent. Haass can bring us closer to the truth, but it’s only those who were directly involved who can deliver it.

Can Haass and O’Sullivan wrap up the enormously difficult matters of flags, parades and the past before Christmas? Not a chance. But they can make progress.