What can the North learn from a small German-Swiss town?

Residents in enclave of Büsingen live a hybrid life, and often feel misunderstood 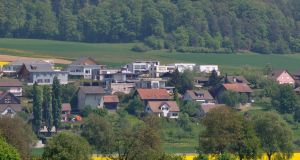 Büsingen, Germany’s one and only enclave, surrounded on all sides by Switzerland. 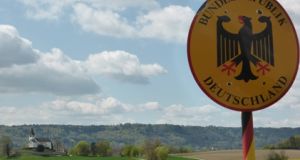 Büsingen is less than 8 sq km large and home to around 1,300 people.

The trout floats motionless in the pristine, glittering river, unaware that it is a Swiss fish in German waters. The fish is similarly oblivious to being discussed by diners on the restaurant terrace above, overlooking the Rhine river in the German town of Büsingen.

The Rhine runs 1,200km through dozens of German towns and cities – Mainz, Cologne, Düsseldorf. But shortly after it begins in Switzerland, the still pristine waters of the upper Rhine briefly become German, then Swiss again.

Welcome to Büsingen, Germany’s one and only enclave, surrounded on all sides by Switzerland. Less than 8 sq km large and home to around 1,300 people, the main street is a wide spot in the road with a half-timbered hotel back to 1674 alongside a hairdresser, a general store, a car dealership and a “running Sushi bar”.

Büsingen’s novelty is both visible and invisible: German and Swiss flags and phone boxes beside the town hall, dual post codes, dual phone codes. German and Swiss police can be seen on the streets, chatting with locals as they go about their daily business inside and outside the EU.

Like his trout-studying diners Mr Oechslin is unaware of Büsingen’s 15 seconds of fame after last year’s Brexit vote. SDLP MP Alasdair McDonnell mentioned Büsingen in discussion over how to manage the Irish border which, in less than two years, will be an external EU wall.

Büsingen was mentioned amid talk of Britain following the example of Switzerland: outside the EU but with access to its single market through bilateral agreements that accept, among other things, freedom of movement for EU citizens.

That all ended abruptly when British prime minister Theresa May steered the UK towards a hard Brexit, promising to prune back EU ties to a minimum to ensure maximum domestic control over borders.

But the situation has shifted again after Mrs May’s election gamble to strengthen her hand backfired. The Democratic Unionist Party (DUP) is making its support for Mrs May’s minority government dependent on greater recognition of Northern Ireland’s special Brexit concerns. With the Brexit clock ticking, is Büsingen back on the table?

The countryside an hour north of Zürich, with lush fields and pretty castles perched on hilltops is a long way from Patrick Kavanagh’s stoney grey soil. Yet this place shares the borderlands experience of Monaghan and Fermanagh, of being neither here nor there.

“We are used to being ignored but we demand attention and get it,” says Anita, a local pensioner, just off the bus. “Long-term residents here like to say: ‘We’re not German, we’re not Swiss: we’re Büsingers.’”

In his office, Büsingen mayor Markus Möll jokes that, among the enclave’s neighbours, the feeling is mutual.

“For the Germans we are Swiss, for the Swiss we are Germans,” says Mr Möll, who has his hands full managing the EU’s most unusual – and porous – outer border. “We have always had to look out for ourselves and fight our corner.”

First mentioned in 1090, Büsingen was once a Habsburg enclave in Switzerland, controlled by a local aristocratic family. It was a family feud over religion that made Büsingen what it is today. In 1693 local ruler Eberhard Im Thurn was locked up by his Swiss cousins in Schaffhausen and released six years later, a broken man. In revenge the Austrians ruled that Büsingen should never fall to Schaffhausen and Switzerland – “as a permanent source of vexation”.

And so, when the enclave of Büsingen was up for grabs again in the early 19th century, it did not go to the Swiss but first Württemerg, then the grand duchy of Baden. Today part of Germany’s southwestern state of Baden-Württemberg, it is administratively linked to Konstanz 50km to the east. For all their history, though, Büsingen is far closer – physically and emotionally – to Switzerland and the town of Schaffhausen, 6km westwards.

As Brexit talks loom in Brussels, Büsingen is looking forward to the 50th anniversary next month of an agreement to resolve the enclave’s existential dilemma.

The treaty that came into force on July 19th, 1967, after 20 years of talks by Swiss and German officials, ensured Büsingen remained German in political terms but allowed the enclave join the Swiss customs union, making it economically part of Switzerland.

The 24-page agreement is a remarkably pragmatic read, though not everything is applicable to Northern Ireland.

For instance the DUP would like Northern Ireland inside the customs union, to preserve tariff-free cross-Border trade. But Büsingen’s economic ties to Switzerland means the German enclave is outside the European Union’s customs union.

That means, in practical terms, that Büsingers spread Swiss jam on their toast each morning because import tariffs make German jam – and all other imports from the “motherland” – prohibitively expensive.

Other Border issues in Büsingen have a ring of familiarity, such as rising euro-sterling pressures. In Büsingen the euro is the official currency but the Swiss franc is the de facto currency.

Some 80 per cent of locals earn their salary in francs, working in Switzerland. But all enclave residents are obliged to pay income tax in euro to Berlin. This can bring disadvantages, as is happening now.

Given the recent surges in the franc’s value of up to 20 per cent, where it is now nearing parity with the euro, Büsingen residents – who get a Swiss payslip, but pay tax to Berlin – are facing higher tax bills, though their daily living costs have remained the same.

That punitive treatment has pushed even more young Büsingers across the border to Switzerland, leaving their home town one of Germany’s oldest communities.

Given all that, wouldn’t it just be easier for Büsingen to leave Germany and join Switzerland? In a 1918 referendum, 96 per cent of locals were in favour, but the result was ignored because the Swiss had no territory to offer in exchange. A recent academic study shows a more differentiated picture today, with opinion divided evenly between the status quo and becoming Swiss.

Büsingers’ border experience – and the related feeling of not being understood by the capitals – gives locals a pragmatic and phlegmatic air they share with the Northern Irish.

Nor are Büsingers’ German EU romantics, judging from the nods of locals at the cool-headed pragmatism of Swiss visitors.

Didier, a 65-year-old from the Swiss city of St Gallen, says many in Switzerland relate to British criticisms of the EU: that it grew too fast and tries to regulate too much.

“But even we Swiss see we can’t shut ourselves away,” he says in Büsingen’s riverside restaurant. “We see the economic benefits of real co-operation with the EU, with the conditions attached, and Britain will need to see that too.”

And what of Northern Ireland? It’s a long way, in every sense of the word, from Büsingen to Northern Ireland. One is a sleepy enclave of 1,300 people, the other a place shaped by decades of sectarian violence.

In spite of all that, mayor Markus Möll still sees lessons to be learned from his town’s experience – inside, yet outside the EU – when Brexit talks turn to one of the first three priorities: resolving the Northern Ireland question.

If Büsingen shows anything, he says, it is that treaties can resolve even the most complicated legal and territorial questions, leaving it up to pragmatic locals to regulate the rest among themselves.

“If the will is there you can always find a solution once you define the rights and obligations on both sides,” says Mr Möll. But what if there’s no will among Brexit negotiators, or EU member states, to set a precedent over Northern Ireland?

Büsingen has already set a precedent inside the EU, says Mayor Möll. It takes constant lobbying to keep his enclave’s precedent on the political agenda, and he suggests similar effort will be required in Ireland – on both sides of the Border.

“It’s important that complicated legal agreements reflect life on the ground, so people are not forgotten, bossed around or made a pawn in a bigger game,” said Mr Möll. “Again and again you have to remind politicians of the most important lesson: put people first, not borders.”

“No ID required for Büsingen residents and Swiss citizens travelling in and out of the enclave.

“Büsingen motorists are entitled to a special registration plate for their vehicle, allowing them bypass Swiss customs controls.

“German law applies in Büsingen except in a list of defined areas, where Swiss provisions prevail: customs; farming (including disease control); sales tax (including duty on cigarettes and alcohol; drugs; brewing and distilling.

“Cross-border police co-operation is obligatory, in particular handing over persons sought in the other territory. Armed, uniformed Swiss police are permitted to move and operate freely in Büsingen, but no more than 10 at a time. Up to 10 German armed, uniformed police are allowed pass through Switzerland to Büsingen at a time. The number of German police present at any time in Büsingen cannot exceed a ratio of three officers per 10 of population.”