Warning on danger to future of Irish language 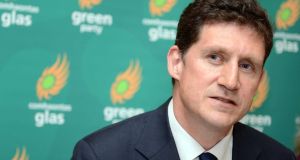 Green Party leader Eamon Ryan: “What we have now is a situation where even traditional Gaeltacht areas are declining.” Photograph: Eric Luke/The Irish Times

The Irish language could be all but extinct in a generation if remedial action is not taken, the Green Party has warned. The party last night launched a new policy paper on the language in Dublin, along with a new bilingual website in which it emphasised its full title, Green Party Comhaontas Glas.

Party leader Eamon Ryan referred to the recent report, written by Conchúr Ó Giollagáin, which showed that the decline of the language as a living and spoken tongue was worse than had been previously thought.

“What we have now is a situation where even traditional Gaeltacht areas are declining. A language goes extinct every two weeks and there’s a real risk that Irish will go that way this century if we don’t take serious steps soon.

“In 2010 we contributed to a 20-year plan to preserve and promote the Irish language – the Government has ignored this. We need to change the way we treat our language. It is an important part of our cultural heritage,” he said.

The chairman of the party’s Irish language group, Seán Ó Buachalla, said the party had introduced a language charter in 2014. He criticised the Government, saying they had put reform of the Official Languages Act on the long finger.

“Our language policy is based on international best practice. It takes into account a range of views and it is ambitious. The Government now needs to show the same ambition before it is too late.”

Dr Ó Giollagáin’s report showed that Irish might not be the main spoken language in any Gaeltacht area by 2025. He said research showed Irish was spoken by two-thirds or more of the population on a daily basis in only 21 of the 144 electoral divisions in the State’s Gaeltacht areas.