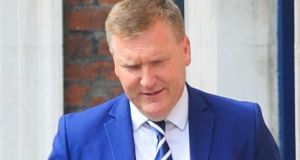 Minister for Public Expenditure Michael McGrath said in July the Government would honour the terms of the current public service pay agreement.

Trade unions are to begin talks with the Department of Public Expenditure on Tuesday about the potential of reaching a new pay deal for the country’s 340,000 State employees.

Minister for Public Expenditure Michael McGrath is expected to provide an update to the Cabinet on Tuesday on the issue of public service pay ahead of the engagement between his officials and senior figures of the public service committee of the Irish Congress of Trade Unions.

The Minister said in July that the Government would honour the terms of the current public service pay agreement including a final two per cent increase which is scheduled for October 1st.

The payment of this increase had been criticised by some commentators given the impact of the Covid-19 pandemic on the public finances.

Apart from the pay rises due in October, the Government is also scheduled to unwind previous cuts made under financial emergency legislation to the pay of higher earners - those receiving up to €150,000 - between October and next July.

The Department of Public Expenditure said on Monday that the current public service agreement will expire at the end of the year.

It said that following a meeting between the Minister and the trade unions in July, it had been agreed the parties would have preliminary exploratory discussions in September to establish whether a sufficient basis existed for negotiations on a new agreement “appropriate to current circumstances”.

A spokesman for Fórsa, the country’s largest public service trade union, said on Monday the meeting with the Department of Public Expenditure this week would be “very exploratory in nature”.

The spokesman said it would form “part of a process of assessment - by both sides - regarding the prospects for reaching an agreement if negotiations were to commence”.

Briefing material prepared for the Minister by officials on taking up the role at the end of June said that in light of the impact of the Covid-19 pandemic on the public finances, any talks or measures in relation to pay would have to be carefully considered.

It said maintaining the pay bill at sustainable levels “will be an ongoing challenge for 2020 and beyond”.

The briefing document said that the gross public service pay bill would be about €19.7 billion this year.

The briefing material said that the public service pay bill had been increasing by about €1 billion annually over recent years. It said about one third of this increase was due to wage rises under public service agreements.

It said two thirds of the rise in the pay bill was accounted for by increases in the number of staff in the public service which it said was increasing by about 9,500 per year.

The Department of Public Expenditure briefing material said that the various public service pay accords over recent years had played a key role in containing growth in the pay bill since 2010.

The Minister told the union that its members would have key roles in three of the Government’s healthcare priorities, Covid-19, the HSE’s winter plan and the overall Slaintecare reforms.