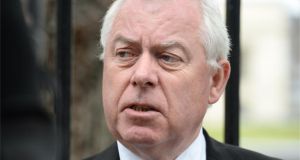 Mike Jennings, general secretary of the Irish Federation of University Teachers: said the college was attempting to exploit students’ understandable anxiety in the pre-exam period in the most cynical way. Photograph: Dara Mac Dónaill/The Irish Times

The Irish Federation of University Teachers has called on University College Cork to withdraw a letter to students at the Tyndall National Institute claiming industrial action by researchers will affect their exams.

The action is part of an ongoing dispute over pay rates and conditions for researchers at the institute, which is part of UCC although off campus.

Staff at the institute, a research centre for information and communications technology, say there is pay inequity of up to 20 per cent between them and those doing the same or similar work on the UCC campus.

Members of the federation and Siptu began strike action earlier this month and are due to strike again tomorrow, on Thursday and on May 13th.

The federation says UCC wrote to students and told them industrial action would disrupt their examinations, but last night it said assurances had already been given to the students’ union that there would be no interference with exams.

General secretary Mike Jennings said the college was attempting to exploit students’ understandable anxiety in the pre-exam period in the most cynical way. “They should immediately withdraw these allegations and apologise to students for the unnecessary upset caused,” he said.

The federation and Siptu were seeking immediate installation of an agreed appeals process, Mr Jennings added. Last month, UCC said there was no reasonable justification for industrial action, “most particularly during the examination season”.

“The university recognises that this is an extremely stressful time for students and regrets this development at this particular time,” it said. “The university is committed to doing everything necessary to ensure that all examinations proceed normally and remains committed to the agreed process.”