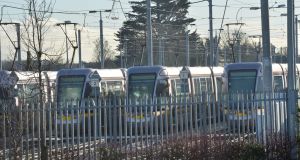 The National Bus and Rail Union has said it will support Luas drivers in their opposition to the company’s planned use of buses to carry passengers during a strike on St Patrick’s Day.

Siptu on Friday stepped up its industrial action announcing four more days of strikes by tram drivers next month as they continue to pursue a pay claim. The union said its picketing would be peaceful and within the law.

NBRU general secretary Dermot O’Leary said the union had written to Minister for Transport Paschal Donohoe questioning the actions of the Luas operator Transdev “in engaging in what can only be described as strike breaking”.

“This firm are paid multiples of millions of taxpayers euros to provide a light rail service for the citizens of the state, it surely falls within the Minister’s remit as the custodian of taxpayers monies to challenge the company’s motives,” he said.

“Our members are extremely concerned that this use of scab labour to break a legitimate dispute may be replicated across the transport sector.

“At a time when ordinary decent bus and rail workers are seeking long overdue pay rises after eight years of pay cuts and Government-imposed austerity measures, it is bizarre that a French company, with that country’s much vaunted social values would resort to a Thatcherite remedy to break this strike.”

Siptu has said there would be no move to block buses Transdev planned to use on Thursday to transport passengers to the city centre from park-and-ride facilities on the outskirts of Dublin.

It described the decision by management as “provocative”, however.

Tram drivers, who, the union argues, have been excluded by management from talks on a pay claim, are reportedly furious at the Transdev move.

Minister for Transport Paschal Donohoe said Transdev’s plans to provide special contingency buses represented “an effort to deliver a level of service to the travelling public on our national holiday”.

The National Transport Authority declined to comment on Friday on whether the financial penalties imposed on Transdev under its contract with the State for failing to provide light rail services during previous strike days would be lessened as a result of the introduction of the bus service.

Talks between Siptu and management in relation to pay for three other non-driver grades of staff at Luas commenced on Friday and will reconvene after the weekend.

Luas drivers are scheduled to strike on St Patrick’s Day, Easter Sunday and Easter Monday as as well as on four other days in April.