Two-thirds of us are now living in urban areas, new figures show 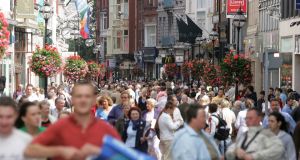 Some 44 per cent of the urban population now lives in Dublin. Photograph: David Sleator

Urban areas are growing and people are living more closely together, new data from the Central Statistics Office (CSO) shows.

Almost two-thirds of the population are now living in urban areas, up nearly 5 per cent since 2011, figures based on the Census of April 2016 show.

Sligo’s rate of urbanisation has changed most, increasing from 37 per cent in 2011 to 40 per cent last year. And 44 per cent of the urban population now lives in Dublin.

People living in urban areas are also living more closely together than they did when the previous census was taken.

The figures also show three-quarters of Irish-born residents are still living in the county of their birth. But there were vast differences between areas; more than 65 per cent of people now resident in Meath were not born there, while in Cork, the figure was 25 per cent.

The fastest-growing town in the country was Saggart, in south Co Dublin, where the population, now at more than 3,100, increased by 46 per cent since the previous census, in April 2011, and by more than 260 per cent since 2006. Nearby Rathcoole experienced the next largest percentage increase in population, from more than 3,420 to more than 4,350, a 27 per cent rise, since 2011. Among the larger towns, Maynooth grew fastest, with an increase of more than 16 per cent from 12,510 to 14,585 people.

Ballyvaughan, Co Clare experienced the largest percentage drop, 26 per cent, in its small population, down from 258 to 191, followed by Dundrum, Co Tipperary, and Gormanston, Co Meath, both down 25 per cent to 165 and 375 respectively.

Decline of the west

There was a drop in the number of people moving home, down by 3.5 per cent on the same figure in 2011.

Of the more than 263,000 people who did move in the year up to April 2016, more than 18,700 people left the capital for counties including Kildare, Meath and Wicklow. More than 45 per cent of movers were aged between 20 and 34 years old, with peak moving age at 28 years.