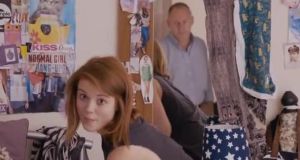 A still from SLR by Stephen Fingleton: the story of a pornographer who becomes obsessed with a mysterious, anonymous photographer

Two Northern Irish films have made it onto the long list for best live-action short at the Academy Awards. Ten films appear on the list, from which five will go forward as Oscar nominees.

Stephen Fingleton’s SLR stars Liam Cunningham in the story of a pornographer who becomes obsessed with a mysterious, anonymous photographer. Mr Fingleton’s film has already won best Irish short at the Foyle Film Festival and played successfully at the Glasgow and Cracow film festivals.

The director sees the film as following in the tradition of “voyeur” classics such as The Conversation and Blow-Up.

This is no small achievement. Some 141 films were submitted this year. The American Academy of Motion Picture Arts and Sciences’ short films and feature animation branch reviewing committee then whittles that field down to manageable size. Special screenings will be held in Los Angeles, New York, London and San Francisco, before the announcement of the nominees on January 15th.

Ireland has performed extraordinarily well in the short films races in recent years. Earlier this month, Alan Holly’s Coda was long-listed for the best animated short Oscar. In 2011, Terry George and Oorlagh George’s The Shore won best live-action short. In 2006, Martin McDonagh’s Six Shooter took the same prize and launched Mr McDonagh, then known as a playwright, into his successful film career.

SLR from Stephen Fingleton on Vimeo.

Boogaloo and Graham, Michael Lennox, director, and Ronan Blaney, writer (Out of Orbit)