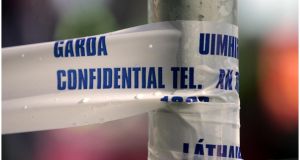 Garda sources said it was extremely fortunate that no one was injured as the men crashed into two cars and then two garda cars before getting up caught up in match traffic on the Boreenamanna Road.

“These fugitives were fleeing from gardaí at the time and they crashed into four cars - two belonging to gardaí and two belonging to civilians - there were also a lot of pedestrians heading to the semi-finals in Pairc Uí Rinn- it was lucky there no one was seriously hurt,” said a garda source.

The two men were arrested by a combination of uniformed officers and armed detectives . One man was taken to the Mercy University Hospital for treatment for minor injuries while the second man was taken to Togher Garda station for questioning.

Gardaí were trying to arrest the men after they received a report that a shot had been fired at a house on Noonan Road in Gilabbey on the city’s southside shortly after 1pm. No one was injured in the shooting incident but a family were said to be badly shaken by the incident.

Both men - a man in his 30s from the Turners Cross area of the city’s southside and a man in his 20s from Gurranebraher on the city’s northside - were arrested under Section 30 of the Offences Against the State Act which allows gardaí detain suspects for up to a maximum of 72 hours.

Gardaí have yet to recover a firearm used in the shooting – believed to be a shotgun – but they have cordoned off the scene of the shooting at Noonan Road for a forensic examination.

The car they used is being examined by garda technical experts.