Accelerated €1,000 rise this month was only step in right direction, says TUI president 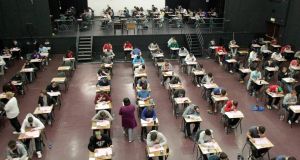 Joanne Irwin said it was an urgent issue as teachers are being attracted to other careers or countries, and there is a shortage of teachers in some subjects. Photograph: Mark Stedman/RollingNews.ie

The €1,000 pay rise for teachers and other public service personnel, which was brought forward by several months to the beginning of April, represents merely a step in the right direction, the president of the Teachers’ Union of Ireland (TUI) has said.

In an address to the union’s annual conference in Cork on Tuesday, Joanne Irwin indicated that in forthcoming talks with the Government the TUI would be seeking pay parity for teachers appointed since 2011 and the reversal of cuts and earning freezes experienced over recent years by other teachers.

She also urged that all teachers who were in the revised public service pension scheme introduced in January 2013 should no longer be required to pay the current public service pension levy. She said the revised scheme, under which benefits were determined by career average earnings, “had a disproportionately pronounced effect” on those working in jobs with long salary scales.

Ms Irwin told the conference that the TUI had made progress towards achieving pay parity for those teachers appointed since 2011. However, she said “we never pretended that we have arrived at the end of the road”.

“Achievement of our overall aim of pay parity for all based on the pre-2011 pay rates implies a logical sequence of further steps, the first of which is restoration of the H Dip allowance to bring those teachers employed on or after December 5th, 2011, into line with the pay of those appointed between January 1st, 2011, and that date.

“Our message to Government is clear and unambiguous. This issue is urgent, as a matter of justice. It is also urgent in pragmatic terms. As out economy recovers and the attraction of other careers increases, there is an acute and increasing shortage of teachers in some subject areas, particularly Irish, modern languages, home economics and physics. There is also evidence of an exodus of teachers to England and the Middle East.”

Ms Irwin also said that recent entrants to teaching were not the only ones to experience cuts and freezes over recent years.

“We have members who have significant outgoings and commitments, who have families whose needs must be attended to. These members have , to a large degree, suffered in silence. Their silence is about to give way to a loud demand and that demand will be expressed by the TUI at the talks.”

Hatchets and knives seized after scuffles at funeral 15:59
HSE concerned intellectually disabled man living in ‘squalor’ 15:31
Sourcing equipment to protect against coronavirus a major challenge - HSE 15:29
Dublin's long-awaited Liffey cycle route to be in place by August 15:12
Boy who lost part of foot in lawnmower accident settles case for €725,000 14:50