Martin Howley was known from ‘north Norway to China’ 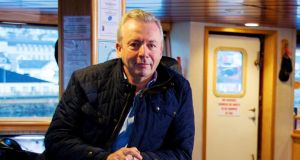 Tributes have been paid to pioneering mackerel skipper, Donegal-based businessman and fishing industry leader Martin Howley who has died after a short illness.

Mr Howley (63) was joint owner of one of the largest Irish mackerel vessels, the Atlantic Challenge, and served a number of terms over 18 years as chairman of the Killybegs Fishermen’s Organisation (KFO).

After he came ashore, he became involved with leading netmaking factory Swan Net Gundry in Killybegs, and was a consultant on fishing techniques in several countries, including Chile, Peru, Iran, Namibia and Alaska. He also had seafood interests in the US, and purchased Castle Murray House Hotel in south Donegal some years ago.

Former KFO chief executive Joey Murrin described Mr Howley as a natural-born leader who was “known from the north of Norway to China” and was a “fisherman at heart”.

Originally from the Sligo-Mayo border, Mr Howley began his fishing career in Howth, Co Dublin, where his potential was recognised by mackerel skipper and supertrawler owner Seamus Tully of Killybegs Fishing Enterprises, with whom he formed a very successful partnership.

In 1998, the two men opted to sell the €70 million Atlantic Challenge, just 18 months after its delivery from a Norwegian shipyard. Explaining his decision to downsize, Mr Howley noting the EU’s Common Fisheries Policy was maintaining a “vice-like grip” on Irish landings, while other fleets were expanding.

Recently, Mr Howley was a founder of Bio-Marine Ingredients Ireland Ltd, the Norwegian-Irish project which aims to extract high-end proteins, oils and calcium from fish for use in food ingredients.

KFO chief executive Sean O’Donoghue said Mr Howley had been a “hugely prominent and progressive part of the fishing community since moving to Killybegs in the 1970s” and was irreplaceable.

“We have lost a dear friend and a genuine stalwart of the fishing industry who was enormously respected at all levels,” Mr O’Donoghue said.

“Martin touched so many lives, he possessed a charisma and warmth which endeared him to so many people in Killybegs and much further afield,” he said, noting that his vision and his knowledge and understanding of the sector was “complemented by an innate modesty”.

“He was comfortable in any company, be it with political leaders and decision makers or neighbours and fishing families,” said Mr O’Donoghue.

“Martin was quite simply, a great man. He had an uncanny knack of drawing people to him, of bringing people with him. He was a natural leader who saw the

positives in the most difficult of predicaments,” Mr Whooley said.

A wake will take place at Castle Murray House Hotel on Thursday from 10am to 10pm, and his funeral takes place at St Joseph and St Conal Church, Bruckless, Co Donegal, at 12pm on Friday, with burial afterwards in Bruckless cemetery.