Trial of Ibrahim Halawa adjourned for another two months 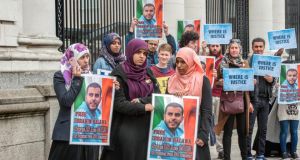 Somaia, Fatima and Omaima Halawa, sisters of Ibrahim Halawa, protest outside Government Buildings in support of their brother whose hearing has been postponed for another two months. Photograph: Brenda Fitzsimons/The Irish Times

The trial of Irish national Ibrahim Halawa in Egypt has been adjourned for two months.

It is the seventh time the case of the 19-year-old from Firhouse in Dublin, who was arrested almost two years ago during rallies in Cairo, has been put back.

The adjournment was declared because 16 other defendants were sitting exams in prison and could not attend.

Mr Halawa is on trial with some 420 others who were detained at the Fatah mosque in central Cairo following a confrontation with security forces and local residents after Muslim Brotherhood president Mohamed Morsi was ousted.

The judge said all the defendants had to be present for the trial to proceed. Charges range from murder and attempted murder to participating in an illegal demonstration.

The next session is scheduled for August 2nd, after the Muslim holy month of Ramadan at the request of lawyers for the defendants who argued their clients could not be attentive if fasting.

The proceedings, held at a court in Wadi Natrun north of Cairo near the prison complex where the defendants are being held, were attended by consul Seán Norton on behalf of the Irish Embassy in Cairo.

Irish Embassy and Department of Foreign Affairs officials have pressed for Mr Halawa’s release on bail so he could return to Ireland and prepare for his Leaving Cert.