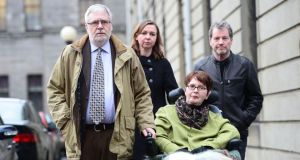 Tom Curran, the partner of late right-to-die campaigner Marie Fleming, has said he is disappointed a Garda investigation is under way into her death.

Ms Fleming died in 2013 after a long battle with multiple sclerosis, and having unsuccessfully challenged the ban on assisted suicide through the courts.

Mr Curran told The Irish Times he thought “that everything had just been left”, and had no idea why a Garda investigation had taken so long.

In early 2013, both the High Court and the Supreme Court rejected Ms Fleming’s challenge to the Criminal Law (Suicide) Act of 1993, which decriminalised suicide, but made it a criminal offence to assist another person to take their own life.

Ms Fleming had argued that, as a severely disabled person unable to take her own life unaided, the law disproportionately infringed her personal autonomy rights under the Constitution and the European Convention on Human Rights.

The Supreme Court found there was no constitutional right to die or to be assisted to do so. But it said, there was nothing to prevent the introduction of legislation to deal with cases such as that of Ms Fleming.

The High Court, in its judgment, had said it was “sure” the Director of Public Prosecutions would act in a “humane and sensitive” way in considering whether or not to prosecute any assisted suicide of Ms Fleming.

“Everybody interpreted that as meaning while we can’t change the law, we will make an exception in this particular case - and I think the whole country interpreted it that way,” Mr Curran said.

“Maybe they have decided they don’t need to, I don’t know, nobody has told me,” Mr Curran said.

After the Supreme Court case, Mr Curran had told media he would still be willing to help his partner to die if she wished him to. Earlier this year, he said he was worried over how gardaí would react to an admission of playing a role in assisting with Ms Fleming’s death.

The sentence for assisted suicide is up to 14 years in jail.

Last year, Dublin woman Gail O’Rorke was the first person to be prosecuted in Ireland under the assisted suicide legislation.

She was acquitted of attempting to help Bernadette Forde, who was suffering from multiple sclerosis, to get to the Swiss euthanasia clinic Dignitas - a plan thwarted when a travel agent alerted gardaí.

She was also acquitted, by direction of the judge, of ordering a lethal dose of barbiturates from Mexico, which were later taken by Ms Forde to end her life on June 5th, 2011.