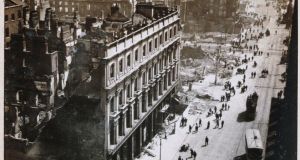 Ruined buildings in Dublin after the 1916 Rising

A new book featuring interviews with 25 relatives of those who fought in the Easter Rising has been launched.

To Speak of Easter Week by Dr Helene O’Keeffe is based on a collection of oral history recordings by her father Maurice O’Keeffe, the man behind the Irish Life and Lore project. Dr Helene O’Keeffe teachers history in St Angela’s College, Cork city.

Based on the testimonies of the sons and daughters of the rebels, their granddaughters, grandsons and other close relatives, the book examines the human legacy of Easter Week and looks at the different ways in which the family members have internalised and attempted to make sense of the actions of their antecedents.

The book includes interviews with five signatories of the 1916 Proclamation. James Connolly’s great-grandson and Éamonn Ceannt’s grand-niece are among those featured.

Two descendents of Pádraig Pearse: Alf O’Loughlin, a former director of the National Library of Ireland, and Noel Scarett were interviewed for the book.

The oldest man to be interviewed was Fr Michael Malin who recently turned 102. He is a Jesuit priest based in Hong Kong and is the last surviving child of an executed leader of the Rising.

Maurice O’Keeffe went to Hong Kong to interview him and stayed for several days. “He is quite lucid,” Mr O’Keeffe said. “He told me that he is determined to live until 2016.”

He is not, however, the oldest person to be interviewed for the Irish Life and Lore Collection. Maurice O’Keeffe also interviewed Dorothea Findlater (104), the daughter of Capt Henry De Courcy Wheeler.

Capt De Courcy Wheeler was staff captain to General William Lowe during the Rising and features in the famous photograph with Pearse beside the nurse Elizabeth O’Farrell when they surrendered.

Mrs Findlater was interviewed at Curragh camp where her father was based and where she spent the first seven years of her life.

Dr O’Keeffe’s research was funded by a scholarship from the Department of Arts, Heritage and the Gaeltacht and by its previous minister Jimmy Deenihan who launched the book on Tuesday evening at the National Library of Ireland.

Dr O’Keeffe said the value of the book lay less in its potential for yielding an unvarnished truth about the revolutionary period, and more in its revelations about the different ways in which families have attempted to assimilate and make sense of their shared history.

Some 240 interviews were conducted by Maurice O’Keeffe for the 1916 oral history collection. These have not just been confined to those who fought on the rebel side in the Rising. A relative of Sgt John Touhy, an RIC sergeant during the Battle of Ashbourne, features along with others.

“Quite a handful of people I have spoken to have died,” he said. “Harry Boland is one man who comes to mind. That’s why I was so anxious to get the project moving.”