Til death do us Dart: Train driver says ‘I choo’ after platform proposal 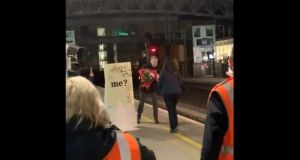 Conor O’Sullivan was waiting at Pearse Station to propose when Paula Carbó Zea drover her Dart train into the station. Photograph: Clodagh Maher/Twitter

At the end of a year most people would prefer to forget, one enterprising man lifted everybody’s spirits by proposing to his train driving girlfriend as she pulled into the station.

Conor O’Sullivan was waiting at Pearse Station in Dublin on Tuesday night at 9pm with a ring, a bunch of flowers and a bottle of champagne in hand.

To reinforce the message he had a sign “will you marry me?” placed on the station platform and the tannoy played their “song” James Blunt’s You Make Me Better.

Fortunately for him, for station staff and for passengers on the train, his girlfriend Paula Carbó Zea who was driving a Dart train to Fairview, said yes.

“I was expecting something maybe for Christmas, but definitely not like that. I was so surprised,” she said.

Didn’t think anything could perk me up after a busy 13hr shift, and some Gent goes and PROPOSES to his GF driving the incoming train at pearse station. 😍😍😭🙌🏻 @IrishRail #PearseProposal 1/2 pic.twitter.com/wIN0JHPvzV

Irish Rail staff were in on the surprise and installed a Go Pro camera in her cab to record her reactions.

Ms Carbó Zea from Barcelona moved to Ireland three years ago in answer to a call from Irish Rail for train drivers.

She is a trained engineer and said she always had a hankering to be a train driver, a job that has traditionally been a male-dominated profession. “In Spain, it is more normal,” she said.

The couple met a month after she arrived in Ireland and they have been going out together since then. They live together in Blanchardstown.

“I wanted to improve my English, then I met him and I have stayed here. I love Ireland, but I wish it would rain less.”

She does not anticipate getting married until the summer of 2022.

“It was all arranged last minute yesterday, but arranged very well,” he said.