Thunderstorms forecast for Leinster and parts of Munster on Tuesday 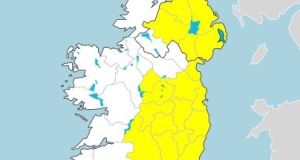 Met Éireann has forecast thunderstorms for Leinster and parts of Muster today and a yellow weather warning is in place. Image via Met.ie

Met Éireann has issued a yellow weather warning for Tuesday with thunderstorms forecast for all of Leinster as well as Tipperary and Waterford. Severe downpours are expected with the prospect of some surface flooding between 7am and 9pm on Tuesday. Thunderstorms and hail are expected again in parts of east Munster and Leinster.

Meanwhile, the announcement of a six-week nationwide hosepipe ban has led to a significant reduction in water use in the Greater Dublin region, Irish Water has said, but the potential for drought remains in many areas.

“Irish Water would like to thank the public for their cooperation and the efforts they have made to conserve water in their homes and gardens over the last week and to appeal to them to continue supporting us in safeguarding water for essential uses,” a spokeswoman for the utility firm said.

Irish Water said no further water restrictions were being planned at this stage but there was no prospect of the hosepipe ban being lifted as a result of heavy rain falling in some areas in recent days.

Irish Water has published a list stating that there are drought conditions or a potential for drought in 23 of the State’s 31 local authority areas.

Irish Water said on Monday that the drought conditions were so entrenched that the rain last week and expected rain this week would not replenish the reservoirs following the recent dry spell.

It said the number of schemes in drought has increased from 27 to 35 and the number at risk of drought has grown from 50 to 52 since the Water Conservation Order came into force a week ago.

Irish Water said a minimum accumulation of 100mm (the equivalent of four inches of rain) would be needed to make up for the lack of rainfall since March.

A spokeswoman said that “if the situation improves” Irish Water would consider lifting the hosepipe ban.

“However, any change is unlikely in the short term. We are continuing to appeal to people to conserve water where they can and to comply with the order to safeguard supplies for essential sanitation and handwashing,” she added.