Clare All-Ireland hurling preview: for €4 I got a hat that sings a verse of ‘My Lovely Rose of Clare’ 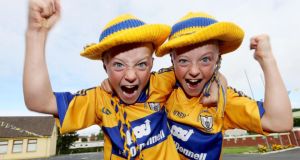 Full disclosure from the start. This report comes to you from a Clarewoman. A Clarewoman who was present in Ennis on the night in 1995 when Anthony Daly’s team came home and the whole county went, frankly, cracked. There is no more appropriate word. If we win on Sunday, I forecast that the din of our collective Clare Shouts will be heard as far as Cork. And we’ll go even more cracked than last time.

In Quin earlier this week Claire Titley, owner of the Monk’s Well bar, was keen to tell me that she had a pair of tickets for the match. If I wanted to enter the draw I had to buy 10 pints. I couldn’t decide if this was brilliant marketing by a publican or shameless encouragement of alcohol consumption but since I knew I’d be eaten alive by her desperate ticket-hunting customers in the bar if I voiced an opinion on the latter I kept my counsel. We’re wise like that in Clare. After all, we’re the county where the original Wise Woman, Biddy Early, came from.

In Sixmilebridge, where manager Davy Fitz is from, the local Centra had a basket full of paraphernalia in themed Clare colours. It was a basket of wonders, with no fewer than 18 separate items on offer, including a “hairy hat” and a “singing hat”.

Who from Clare does not need a singing hat in saffron and blue? I delved deep into the basket, fighting off competition from other shoppers, one of whom was lamenting: “There’s not a jersey to be had in the whole county.” I found the singing hat, but it did not sing for me. I took it to the counter and Centra employee Joe Bracken fiddled with the mechanism. “I can’t believe a Kilkenny man is trying to fix a Clare hat,” he confessed with sorrow. The Kilkenny man could not fix my hat, which just goes to show they’re not good for much at all at all, those Kilkenny lads.

In the end, it was a fellow Clarewoman, another Centra employee, who made my hat sing. For €4 I got a hat that sings one verse of My Lovely Rose of Clare when I press a button in the brim. It is fantastic. I may even enter it for the Eurovision next year.

Killaloolas
When I walked into Helen Stritch’s bar in Clonlara she was watching footage of herself and her bar on an iPad. “Look,” she said excitedly by way of greeting, holding out the device, “it’s me.” I looked at Helen looking at herself on a recording of the 1pm television news that day. There are six people from the village of Clonlara on the team, and RTÉ had been filming there the previous day.

Helen’s bar is so thoroughly decked out in saffron and blue within and without that I felt briefly as if I had gone colourblind. Among the decorations is a mannequin outside the front door, dressed in the Clare kit. “A friend of mine works in Dunnes Stores in Limerick, and he got him for me,” Helen confided. “He’s only on loan, though.” Let’s hope he doesn’t get liberated, once locals realise there is a Limerick man disguised in Clare colours in their midst.

At Killaloe I was in search of the mysterious band, MC and the Killaloolas, who have released one of the many county songs, the earworm, The Banner’s Back Again. Mysterious because they are choosing to remain anonymous and unphotographed for the time being. Given the “Killaloolas” part of the name, I figured they must be locals.

“Ah, they’re definitely not from here anyway,” Ann Benson told me in the Anchor Bar. “No, not from here,” chorused her customers, including Noel McInerney (18), who has his own Clare song out on YouTube, The Banner’s Road to Croker. “My song isn’t cocky,” he said. “There isn’t a verse in the song that says the cup is coming home.”

“Local people like to think they know everything,” Xavier McCullough, manager for the Killaloolas told me later, chuckling down the phone. “All the lads are from Killaloe.”

So among the many cracked things that are going to happen if Clare win tomorrow, the Killaloolas will be performing their song around the county on a stage rigged up to the back of a tractor, including at the homecoming in Ennis. “Like that scene from Father Ted,” McCullough explained helpfully.

Moreover, one of the band members is a potter by trade. He has been creating a life-size statue of Davy Fitz in his shed for the last fortnight. “I’ve seen it, and it’s starting to take human shape,” McCullough confirms. “If Clare win, it’s going out on his front lawn in Killaloe, and he’s rigged it up to sing The Banner’s Back Again.”

Come Monday morning, the Cliffs of Moher may have some competition as Clare’s chief tourist draw.