There really is something about Mary Mitchell O’Connor 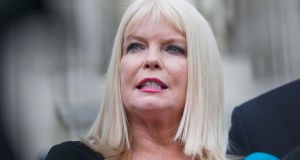 Mary Mitchell O’Connor: The Minister for Jobs “works hard, but is not up to it,” says one TD, a woman. “That’s the common consensus, unfortunately.” Photograph: Gareth Chaney Collins

She drove her car off the plinth in Leinster House, much to the amusement of others. She was one of the leading backbench brown-nosers of Enda Kenny at the Fine Gael Parliamentary Party. She enraged her colleagues and competitor TDs by being promoted straight to Cabinet.

Her big budget idea of a special tax rate for returning emigrants was shot down in public by the Taoiseach himself, hours after it was floated. She was monstered at a meeting of her own parliamentary party.

1 Coronavirus: Non-essential travel from US set to be banned within days
2 Covid-19 incidence in the Republic set to surpass that of UK
3 ‘Our hearts are broken’ – implications of fresh lockdown sink in
4 German nudist chases wild boar that stole laptop at Berlin lake
5 As Irish economy reawakens, we find Sleeping Beauty has a hangover
6 Are we really facing the death of the office?
7 Dear Roe, dear Trish, dear John: Your thorniest sex, relationship and parenting problems
8 All eyes on Tenet, the spy movie with everything to prove
9 Google to roll out software fix to remedy issue with Covid app
10 Murky world of international shipping behind explosion in Beirut
11 Portlaoise locked down: ‘Our older clientele haven’t been back’
12 New call centre at Dublin Airport to track arriving passengers
13 Covid-19 globally: Victoria, Australia, reports most deadly day
14 Maureen Dowd: The hell that awaits a woman vice-presidential candidate
15 Pollan is unique to Ireland so why don’t we eat more of it?
16 Ecuador navy tracks huge Chinese fishing fleet near Galapagos
17 Meet the Bearman of Buncrana: ‘I knew about Joe Exotic for years’
18 Irish in Australia: ‘We are in for a few hard years’
19 Meath creche awaits test results after two cases of Covid-19
20 Coronavirus: No additional deaths in State but 68 new cases
21 John Hume obituary: Nationalist leader who championed ‘agreed Ireland’
22 Solskjær praises Martial for building himself into ‘powerhouse’ centre forward
23 TV Guide: 30 of the best shows to watch this week
24 Bar soap vs liquid: Which is better for the environment?
25 Ten upgrades that will add value to your home and five that probably won’t
26 What’s the story with dining out under new Covid-19 regulations?
27 Financial support for Kildare, Laois and Offaly should be considered, says Minister
28 Masks Q&A: Who has to wear them in shops and what happens if you don’t?
29 Gardaí investigate after man’s body found in Dublin house
30 At least 26 police officers injured in west Belfast violence
31 No final round heroics for Rory McIlroy at US PGA
32 Covid-19: Germany faces its greatest health experiment as millions return to schools
33 Pat Hume: The woman who never gave up
34 Subscribers cry foul over GAA live match service
35 US visa ban: He’ll be born in the USA, but his Irish dad won’t be there
36 Midlands lockdown: ‘Why shut down Offaly and leave Dublin open?’
37 Belarus police crack down as protests erupt after Lukashenko claims victory
38 Scarlet for ya: Paul Mescal does classic Connell in The Rolling Stones’ new video
39 New Zealand marks 100 days without a case of coronavirus
40 Midlands lockdown Q&A: Firstly, is it a lockdown or not?
Real news has value SUBSCRIBE