The Question: Why were we captivated by the supermoon?

In a time of turbulence, the collective admiration of the closest full moon of the century so far is heartening 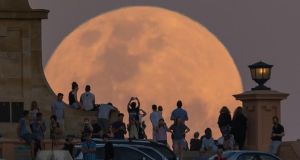 Crowds look at the supermoon in Fremantle, Australia. The moon made its closest approach to Earth since 1948. Photograph: Paul Kane/Getty Images

As the moon loomed extra large in the sky on Monday, the world turned its eyes (and lenses) to the heavens.

It might seem like we’re getting a supermoon every few months – indeed, this year is closing out with three successive supermoons, from October to December.

According to Nasa, the phrase supermoon originally was specific to “a new or full moon that occurs when the moon is within 90 per cent of its closest approach to Earth in a given orbit”. However, it is now generally used to describe a closer-than-average full moon, making the super prefix more than a tad hyperbolic.

But this week’s really was something special, as it was making its closest approach to Earth since 1948, coming to within 356,500km. That makes it the closest full moon of the 21st century so far – it won’t come so close again until November 25th, 2034.

The phenomenon occurs because the moon’s orbit is elliptical, and one side of its orbit (perigee) is closer than the other (apogee). At perigee, the moon can appear 14 per cent larger and 30 per cent brighter, and this week, the full moon and the perigee came within about two hours of each other.

In September 2015, you might recall, we had the unusual combination of a total lunar eclipse and supermoon, resulting in the so-called “super blood moon”.

Context for this week’s supermoon is important, of course. For a planet shaken by the election of a demagogue to its most powerful office, the simple pleasure of admiring the supermoon seemed to act as a valuable antidote. Turning our attention to the sky was not just a welcome distraction, but reminded us, briefly, of our place in the firmament.

In a time of division and anxiety, there was something heartening in the sight of people gathering all over the world in a moment of collective contemplation, admiring that most entrancing of celestial bodies.