The Republican presidential candidate says he raised $6m for US military veterans. Journalists at the Washington Post and Associated Press say the numbers don’t add up 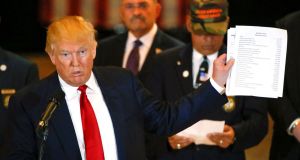 “Donald J Trump, Veteran Fundraiser”: the Republican presidential candidate tells a press conference that the media should be ashamed of themselves. Photograph: Carlo Allegri/Reuters

Donald Trump’s spat with the media revolves around $6 million he claimed to have raised for US military veterans in January.

The telethon-style fundraiser itself was a way of ducking out of a Fox News Republican candidates’ debate that he had more to lose than gain from participating in, while simultaneously allowing him to keep the spotlight on his unorthodox campaign and burnishing his pro-military credentials.

In that sense the fundraiser was incredibly self-serving, but at least it would be doing some good for former soldiers, right?

This is where it gets complicated: while loudly boasting that the event had raised $6 million, including a $1 million personal contribution, from his own fortune, the actual donations to veterans’ organisations didn’t seem to come to anywhere near that amount.

Following up on the story, the Washington Post pursued the issue with veterans’ organisations and with Trump’s campaign team, publishing a story about the shortfall on May 24th.

Trump reacted with predictable ire at the accusation, leading to a heated press conference on Tuesday in which he attacked the media for its coverage, complaining: “The press should be ashamed of themselves. You make me look very bad. I’ve never received such bad publicity for doing a good job.”

He stressed that he wanted no credit for his high-profile telethon, before listing off the 41 veterans’ organisations to which $5.6 million had been donated, explaining that the delay had been caused by a long vetting process to ensure that all the charities complied with tax regulations.

But the Associated Press established that about a dozen of the donations had been made only in the past week and that Trump’s $1 million contribution had been made on May 24th, the day of the original Washington Post story about the delay in disbursing the money.

1 Transgender Cork farmer (65) surprised at positive response to telling her story
2 Bobby Storey: The IRA's planner and enforcer who stayed in the shadows
3 Q&A: How close are we to having a Covid-19 vaccine?
4 Unflappable ‘Dr Tony’ became public face of Covid-19 crisis response
5 Fianna Fáil’s return to power marred by appointments carve-up
Real news has value SUBSCRIBE