The Question: Should we be interested in Brangelina’s split?

Pitt and Jolie were an avatar of true love, like the fairytale couples of our childhood 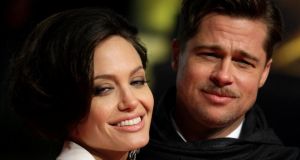 The relationship between Angelina Jolie and Brad Pitt was, we can safely say, one of the longest-running soap operas of modern times. And now that it is over, we naturally begin to question our fascination with it: can such massive interest in a celebrity couple, even a celebrity couple of unparalleled Hollywood star wattage, ever be anything more than frivolous gossip?

It is very probably the most scrutinised and catalogued relationship ever – over the past 12 years, US tabloid magazines have devoted thousands of cover stories to the couple, mostly spurious.

People magazine, explaining the special edition it is rushing out to cover the divorce, said: “Our audience is deeply connected to the couple. Every scenario of their life together is fascinating.”

All that coverage lent the relationship a somewhat fictional quality – and for most of us, Pitt and Jolie might as well be fictional characters. They were as much an avatar of true love as the fairytale couples of our childhood. We are inculcated to see in Sleeping Beauty and Prince Charming the aspirational ideal of a relationship, so it’s no surprise that we instinctively seek out those tropes in later life.

They were a perfect blank canvas, the pleasingly beautiful couple on the red carpet that in some senses represented a glamorised amplification of the picture of happy unity that most of us try to project in our relationships, though admittedly with fewer flashing cameras.

Relationships are demanding, in many ways the most central challenge of our lives. For many people, I suspect, the fact that Jolie and Pitt seemed to make it work, with all that scrutiny and temptation, was a source of comfort and perhaps hope.

With the sudden news of their divorce, we are fleetingly, subconsciously forced to reckon with the frailty of our own relationships. Just as their bond represented the aspirational ideal of true love, so their separation represents the elusive impossibility of attaining it.

So, yes, it is frivolous to be interested in celebrity marriages and celebrity break-ups. But it is also deeply human.