The Question: Are taxes on sugary drinks effective? 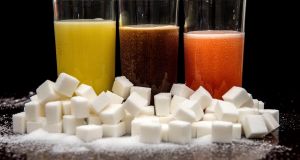 The Irish Beverage Council claimed there was international evidence of ‘a 100 per cent failure rate of sugar tax’. Photograph: Anthony Devlin/PA Wire

As had long been anticipated, Michael Noonan this week introduced a tax on sugary drinks, though delayed until April 2018 so as to coincide with the UK’s introduction of their own sugar tax.

Faced with surging obesity and diabetes levels, such so-called “sin taxes” on sugar are increasingly in vogue. On the same day as Noonan announced the measure, the World Health Organisation recommended a hefty 20 per cent tax on sugary drinks, citing “reasonable and increasing evidence that appropriately designed taxes on sugar-sweetened beverages would result in proportional reductions in consumption”.

However, the soft drinks lobby in Ireland met the budget announcement with an emphatic dismissal of the health benefits of such a tax – the Irish Beverage Council claimed there was international evidence of “a 100 per cent failure rate of sugar tax” in addressing obesity levels, which rather muddies the cola.

Over the past five years, the likes of Hungary, France, Mexico, Chile and Barbados have all implemented levies on “sodas”.

The Mexican experience is the most cited example in favour of the tax – one survey showed that sales fell by 6 per cent in 2014 after its introduction, though that decrease slowed last year. The Danish experiment is often used as a counter-example – the Danes abandoned their sugar tax in 2014, but that move was largely a pragmatic response to consumers getting their sugary beverages in Germany instead.

Chile, meanwhile, which boasts the highest per capita sugary drink consumption in the world, has not yet had as much success as Mexico.

Invariably, the mountain of data related to these limited experiences with the sugar taxes are open to interpretation and dispute, and while there is as yet no evidence of the taxes contributing to falling obesity levels or lowering average body mass index, the taxes haven’t been in place long enough to establish their long-term health benefits.

After unveiling the sugar tax, Noonan announced another health-related tax hike – a 50c rise on a pack of 20 cigarettes. This highlights the sort of company sugar is keeping these days, and the likely path it is on.