The lifesaving hero rats with a nose for explosives 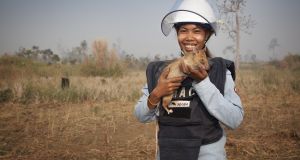 Sophia Mao with Fred, an African giant pouched rat trained to detect unexploded ordnance. “My favourite HeroRAT is Fred because he just gets on with the job like me,” Photograph: Lauren Crothers

Merry usually wakes before the sun rises and is driven to work along with 11 of her colleagues in Siem Reap province, Cambodia. They work for a few hours, napping between shifts. Her job, detecting landmines and other unexploded ordnance (UXO), requires a laser-like focus. It also helps that at about a kilo in weight, she’s very light of foot.

Merry is an African giant pouched rat, or Cricetomys gambianus, a docile and exceptionally smart rodent with superior olfactory abilities. She is one of a team of “HeroRATs” bred, trained and deployed by the Belgian non-profit APOPO, which is headquartered in Tanzania. After working successfully to help detect mines in Mozambique for more than a decade, and in Angola since 2013, the organisation partnered with the Cambodian Mine Action Centre (CMAC) in 2015.

More than 64,000 casualties were recorded between 1979 and February of this year

Cambodia is one of the most mine- and UXO-contaminated countries in the world. At least 500,000 tonnes of ordnance was dropped by the United States as the war spilled over from Vietnam, while decades of conflict after the 1970s saw millions of mines laid throughout the country. According to the 2016 Landmine and Cluster Munition Monitor, more than 1,600sq km of land are still contaminated by mines and other explosive remnants of war.

The impact on communities has been nothing short of devastating. According to the latest figures from the Cambodia Mines/UXO Victim Information System, more than 64,000 casualties were recorded between 1979 and February of this year. Nearly 20,000 of these people were killed.

The Cambodian village of Dai Ouv lies about 25km from the Thai border. It is home to more than 2,000 people and a 3,600-metre-long minefield that has blighted the tranquil landscape for decades. By April 8th of this year, Merry and her clawed comrades, along with their human counterparts, were expected to have cleared the entire area, having put paws on the ground on February 1st.

Pok Nin, a resident of Dai Ouv, always had a heightened sense of fear when he tried to grow crops; one man he knew was killed after stepping on a landmine, while another had a very close call when his tractor triggered one in a field.

Like others, he was sceptical about the rats’ ability to clear mines. “Cambodian rats run everywhere and eat everything,” Nin says. But in February, he was handed a mine-free plot of land that the rats had cleared. “It has changed my life,” he says.

Once their little harnesses are on, the rats mean business. Tethered to a cable that extends across a 10m x 20m grid and attached to handlers on either side, they work the ground with their noses, inch by inch, back and forth. They do this swiftly: the rats are able to check an area the size of a tennis court in 30 minutes.

When a rat smells TNT, the explosive compound found in most landmines, it will stop and focus on that one area before scratching lightly at the soil. Once the scent is confirmed, the teams begin a careful excavation to uncover what lies beneath.

“The impact has been big,” says Vendeline Shirima, APOPO’s international mine-detection rats supervisor from Tanzania. “People would say it was crazy, but when we started clearing Mozambique, they saw it was pretty amazing. We never miss mines using rats.” Mozambique was officially declared mine-free in September 2015.

Specially trained HeroRATs have also proven successful at sniffing out tuberculosis in Tanzania and Mozambique. According to APOPO, the rats have identified more than 11,000 TB cases missed by government clinics, increasing detection rates by over 50 percent in 2016.

Sr Denise Coghlan works in Cambodia as part of the International Campaign to Ban Landmines team that was awarded the 1997 Nobel Peace Prize. “They’re interesting-looking creatures,” she says of the HeroRATs. “I think anybody that can contribute to mine clearance and eradication of the problem is an asset.”

Coghlan and Shirima both note that funding is one of the major challenges in mine clearance. Despite this, rats are cost-effective in the long term, as their basic needs – water, food and a clay pot to bed down in – are inexpensive. They are also able to cover more ground in a shorter amount of time than a person with a detector, speeding up operations and leaving funds for further tasks, or for checking a wider area for explosives.

Back at home in their freshly cleaned clay pots and sated by a hearty meal of banana and peanuts, Merry and her colleagues settle in for the rest of the day. Come sunrise, they’ll be back out in this quiet corner of Cambodia again, noses to the ground.

This article by Lauren Crothers was written for Sparknews