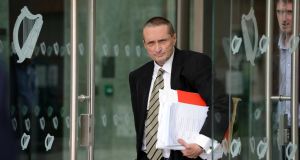 John Devane outside the Special Criminal Court after the sentencing of John Dundon for murder in 2013. Photograph: Eric Luke

A postmortem is expected to be carried out today on the body of well-known criminal defence solicitor John Devane.

Colleagues and members of the judiciary at Limerick District Court are expected to pay tribute to Mr Devane before the court sitting begins this morning.

Mr Devane (55), a father of two from Janesboro, Limerick, was found dead at his home on Sunday. Gardaí said they did not suspect foul play.

Mr Devane, a controversial figure, had been one of the country’s top-earning solicitors through the criminal Legal Aid scheme. His clients varied from shoplifters to some of the country’s most-feared gangland criminals. He also represented all sides in the murderous Limerick feud.

Mr Devane had been battling ill-health in recent years and was using a wheelchair and crutches in the months prior to his sudden death.

He returned to work last year following a 12-month hiatus after recovering from surgery, but continued to struggle with his health.

In 2012 he was found guilty of assaulting rival solicitor John Herbert during an altercation, at Limerick District Court on June 9th, 2011. He denied grabbing Mr Herbert by the neck and attempting to headbutt him.

However Mr Devane, with a practice at Quinlan Street, Limerick, escaped a criminal conviction after paying a €1,000 donation to charity.

In 2008, he offered to mediate between rival criminal factions in an effort to bring peace to the streets of Limerick.

As a mature student he graduated in law from UCC and went on to become one of the country’s highest-paid solicitors.

He represented 450 soldiers in a suit against the State in the army deafness damages claims, and 800 prisoners who were forced to slop out their own jail cells.

Mr Devane unsuccessfully ran as an Independent candidate in the 2007 general election in the Limerick East constituency.

During the political campaign trail, when then taoiseach Bertie Ahern visited the Jetland Shopping Centre in Limerick, Mr Devane confronted him in front of a crowd, demanding Mr Ahern “tell the truth about his personal finances”.

During the publicity stunt Mr Devane had planned to produce a €5 plastic sword he had purchased from a local shop and ask Mr Ahern to “fall on it”, but gardaí seized it moments beforehand.

Four years earlier the pair met again in more controversial circumstances when Mr Devane served Mr Ahern with a subpoena to appear as a witness in the case of two antiwar protesters charged with criminal damage and trespass at Shannon Airport.

Paying tribute to Mr Devane, fellow solicitor Sarah Ryan said: “John was John, and there was never a dull moment when he was around. I’m sure he won’t be annoyed if we smile when we think about him.”

Brian O’Connor, a cousin of Mr Devane’s, added: “John was an immense character, and a fiercely determined advocate of the underdog, with whom he identified. He was a very loving and giving family man. We were all very proud of him.”

Funeral arrangements have yet to be announced.