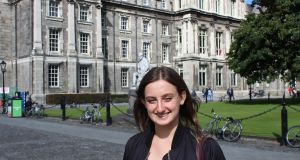 Sinéad Sweeney at Trinity College Dublin: “Don’t just fall into a degree because you feel like you have to”

Amid the drama and turmoil of the CAO round offers, many disappointed students who miss out on their desired course are not aware there are alternative routes into many college courses.

Sinéad Sweeney (23) took a place in an arts degree in University College Dublin (UCD) after receiving her CAO offers, but dropped out in her second year.

She decided to do a one year post-Leaving Cert (PLC) course in pre-university science and now has a place in Trinity College Dublin’s science course this September.

“If I had a better understanding of PLCs when I was 18, I wouldn’t have spent three years just drifting and staying afloat just to be in college in a course I didn’t want to do at all,” she says.

Sweeney adds that Leaving Cert students receiving their CAO offers are put under too much pressure to take up a place in a third-level course, even if it’s not what they want to do. She did her Leaving Cert in Santa Sabina, Howth, Dublin, and got 410 points.

She struggled to concentrate and did not settle into her course in UCD, and explained she had to repeat a semester, and then halfway through her second year decided to drop out.

“There is such a stigma with dropping out of college in Ireland,” she says. “I wish I had taken a year out before going into college, because I wouldn’t have gone in and wasted years in a course I didn’t like.”

She heard of the pre-university science course from a friend and took up a place at Killester College for Further Education.

Other pre-university Fetac courses include law, health science, nursing, arts, engineering and computer science. Many of the one-year PLC courses only cost between €450 and €600. The further education courses can offer students with a particular aptitude for certain area a route to study it, if they fall short of the overall CAO points for the course.

Last year 10,880 students with PLC qualifications were offered places in third-level courses, according to CAO statistics from 2016. However, some students who apply to the CAO with their PLC course score may also apply with their Leaving Cert points from previous years, and can accept an offer based on either.

Dr Graham Love, chief executive of the Higher Education Authority, says students who fail to get enough CAO points for their desired course should not panic. “Other options are available to you outside of the CAO system to access higher education,” such as Fetac courses, he said.

New apprenticeships in financial services, insurance, and IT are also being rolled out by Solas, a State further-education institution, to provide an alternative to third-level courses.

“I had always wanted to study science, I loved all the science subjects in the Leaving Cert, but I just was convinced the course was out of reach. I didn’t know there was another way,” Sweeney says.

“My Leaving Cert has absolutely no impact on the fact that this September I’m going to Trinity College and I’m doing science. The CAO is not the end of the world.”

Entry into the limited number of university places from Fetac courses is competitive. Sweeney got nine distinctions in her nine exams but, she says, even then she was worried she might not get a place in Trinity.

In the grand scheme of things, a year when you’re 18 or 19 is really nothing,” says Sweeney. “So many of my friends have dropped out, or changed courses, or switched colleges, or transferred.”

“I would advise anyone that’s unsure of taking a place in a course that there are other options, don’t just fall into a degree because you feel like you have to.”