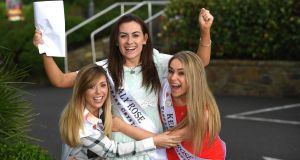 The youngest contestant in this year’s Rose of Tralee final will be the first on stage this year.

Offaly Rose Emma Kirwan (18) is one of 32 who made it to the televised final tomorrow night.

In a new format, all 65 Rose contestants have made it to Tralee for the final, but only 32 go forward to Monday and Tuesday’s televised final.

The rest will feature on a programme to be broadcast on Monday night on RTÉ One, The Road to the Dome, which will be broadcast at 6.30pm.

It has been a busy and dramatic week for Ms Kirwan who got her Leaving Certificate results. She was pleased with the outcome which she hopes will allow her to pursue her career as a pilot in the Air Corps.

The bookies’ favourite is the Kilkenny Rose Sarah Kearns (25) who has won a camogie All-Ireland with the county. She is pursuing a PhD in educational psychology in UCD.

Second favourite Rosie Burke (23) from Ballinderreen in south Galway, who has just qualified as a vet has also made it through to the final.

However, Chicago Rose Maggie McEldowney, who also figured among the favourites has not made it through to the final.

The full list, in no particular order, for the final is: