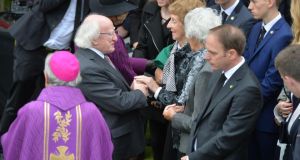 Ireland needs people who believe in their community, their country and in putting others before themselves, Taoiseach Enda Kenny told mourners at the State funeral for 1916 martyr Thomas Kent.

Mr Kenny told several thousand mourners gathered in Kent’s home village of Castlelyons near Fermoy, Co Cork, that it was thanks to sacrifices by Kent and others like him that Ireland was free to exhibit the same humanity and idealism that informed his life.

“This includes the members of our Defence Forces – Óglaigh na hÉireann – who continue their time-honoured tradition of service of their country, both at home and abroad, and it is fitting that they have brought Thomas here on his final journey.”

Delivering the oration at the Kent family plot at St Nicholas’s Church, he said Ireland today was free and all over the world Irish men and women served their fellow man in famine and conflict zones.

“Today, in the blue and grey of the Mediterranean, it is the green, white and orange borne by the men and women of our Naval Services that symbolise human hope and heart and dignity . . . It is that same humanity, dignity and hope that kept and moved Thomas Kent.”

Following the requiem Mass by Bishop of Cloyne Dr William Crean, Mr Kenny recalled the events of May 2nd, 1916, which led to Kent becoming only one of two men (along with Roger Casement in London) to be executed outside Dublin after the Easter Rising.

He recalled how Kent and his brothers had fought a party of RIC who called to their family home as part of a round-up of nationalists in the wake of the Rising and how they only surrendered when they ran out of ammunition.

Earlier, military historian Quartermaster Sgt Gerry White delivered a eulogy for Kent in which he recalled that for 99 years Kent lay in a lonely grave in what is now Cork Prison.

“Today Thomas Kent has become someone who is very much in the present – today, members of Óglaigh na hÉireann, the Irish Defence Forces, will render him the military honours that were denied him 99 years ago,” he said.