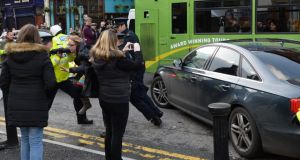 A protester blocking the exit is pushed aside as the Taoiseach’s car leaves the Mansion House, in Dublin. Photograph; Dara MacDónaill/The Irish Times 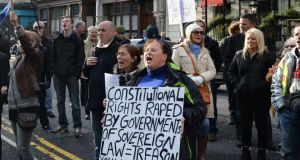 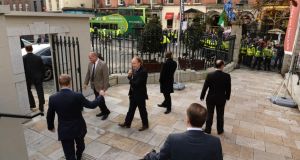 Enda Kenny waited at the exit of the building for several minutes before being led him to his car. Photograph: Dara MacDónaill/The Irish Times.

The latest incident follows in the wake of yesterday’s fractious protest in Tallaght where Tánaiste Joan Burton was confronted by opponents of the proposed tax and trapped in her car for more than two hours.

There were skirmishes between protesters and gardaí outside the Lord Mayor’s residence where Mr Kenny launched the Royal Irish Academy’s five-volume history of the art and architecture of Ireland.

About 50 protesters demonstrated as the Taoiseach arrived and left after the launch but Mr Kenny and Minister for Arts and Heritage Heather Humphreys were able to walk into the building with relative ease.

As he entered, Mr Kenny would only say of the anti-water charge protestors: “I’m used to it.”

On the way out, when asked again about the protests and the incident yesterday involving Ms Burton, Mr Kenny said “well it’s not about water, is it?”

He waited at the exit of the building for several minutes before being led him to his car. About 35 gardaí were on duty holding back the protesters on Dawson Street.

Demonstrators shouted “Enda, Enda, Enda, Out! Out! Out!” as the car exited. A woman jumped in front of the vehicle as but was pushed aside by a garda. Further pushing and shoving ensued as gardaí held back protesters back.

Ms Burton said she was “terrified” children would get hurt during the demonstration in Jobstown, Tallaght, which held up her ministerial car for 2½ hours after she attended a graduation ceremony.

She accused Mr Murphy, a recently elected TD for Dublin South West, of not understanding the emotional significance of the efforts made by those who graduated from An Cósan higher education college.

The college helps those from a disadvantaged background who missed out on third-level education after school.

She said Mr Murphy, who went to the private Institute of Education in Dublin and then to UCD and is not from the area, did not appreciate how important education was to those who graduated from An Cósan.

“He probably went straight from school to college. I don’t know if he appreciates the effort people put into education and the huge success story that people make of theirs,” she told RTÉ’s Marian Finucane today.

He told The Irish Times: “She is engaging in personal insults. It shows the Labour Party is under pressure. What stands is what people do and stand for as opposed to where they came (from) or where they went to school,” he said.

“It was a personal attack. That’s what happens when people are under pressure.”

The Tánaiste said protesters had rocked her car, banged on the windows and roof and tried to turn it over.

Ms Burton said of Mr Murphy: “He was standing at the back with a loudhailer leading the chanting. If that’s his idea of a peaceful process, I would not like to see that norm being set for Ireland by him as the way people in Ireland protest.”

The Tánaiste also accused the protesters of throwing missiles including water bottles and eggs at the car and also at gardaí.

She said many of those involved in the demonstration were not from the area and were instead from different “ultra-factions”.

Mr Murphy said the eggs had been thrown at the ministerial car by “local young fellas” who were alienated from the State and that he had repeatedly tried to stop them.

Minister for Health Leo Varadkar called on his and Ms Burton’s constituency colleagues - Socialist Party TDs Joe Higgins and Ruth Coppinger - to publicly dissociate themselves from the intimidation at the protest.

“The protest in Jobstown saw behaviour of the worst kind. There are reports of intimidation, aggression, sexist remarks and abuse of the gardai who were trying to keep the peace. Essentially, a happy graduation day was hijacked,” he said.

“Protest is a right in any democracy. Protest has achieved many positive changes. Intimidation achieves nothing but a culture of fear. There is no place for this sort of behaviour in a modern democracy.”