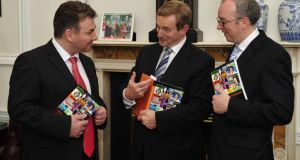 An Taoiseach Enda Kenny pictured with Donnacha O’Beachain (left) and Mark O’Brien (right) editors of Political Communication in The Republic of Ireland, in The Hibernian Club, Dublin. Photograph: Aidan Crawley

Speaking at the launch of Political Communication in the Republic of Ireland, edited by Mark O’Brien and Donnacha Ó Beacháin, he referred to the enormous changes in politics and the media since he was first elected to the Dáil 39 years ago.

Stressing the importance of the EMC in enabling the Government to get to grips with important economic issues, he said the Cabinet was still the ultimate decision-making body.

The EMC has come in for criticism from some Fine Gael backbench critics of Mr Kenny in recent weeks but the Taoiseach said the structure had proved its worth to the people of Ireland.

Sometimes those involved in the media failed to appreciate the human element in politics, he said.

*This article was amended to correct an error on November 28th, 2014.