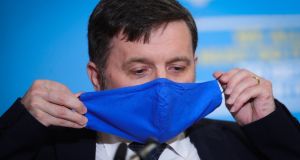 The message must go out loud and clear that dangerous anti-social behaviour will not be tolerated,” Robin Swann said. Photograph: Kelvin Boyes/Press Eye/PA Wire

The Northern Ireland Executive must take “swift action” against the “deplorable” behaviour of some young people attending house parties in part of South Belfast, the North’s health minister has warned.

The message must go out loud and clear that dangerous anti-social behaviour will not be tolerated,” Robin Swann said.

It follows several nights of house parties and anti-social behaviour in the Holyland area, which is popular with students.

The Executive’s ministerial-led group on the enforcement of Covid-19 regulations was due to meet for the first time on Wednesday evening to address concerns after scenes emerged of crowds of young people at house parties and drinking on the street or in front gardens.

It will also include representatives from the police and Belfast City Council.

Mr Swann said he did not want young people to become the “scapegoat” for the increase of coronavirus in the North, but such activity must be “brought to a swift and sharp end.”

Both Queen’s University, Belfast and Ulster University have said students breaching the regulations will face disciplinary measures, and they have outlined to new and returning students that they have a responsibility to protect the local community from coronavirus.

The Police Service of Northern Ireland (PSNI) said on Wednesday it had responded to 51 calls in the area since September 13th.

Following the most recent incidents, in the early hours of Wednesday morning, they arrested and charged a 20-year-old man for disorderly behaviour and issued four prohibition notices at properties hosting parties and two community resolution notices for indecent behaviour.

An 18-year-old man was also arrested on suspicion of a number of offences later on Wednesday.

“A large number of people are acting responsibly but there are a few who continue to behave recklessly and are causing disruption for the local community,” said Chief Inspector Gavin Kirkpatrick.

Police would “robustly address all incidents of antisocial of criminal activity,” he said.

Fresh limits on the number of people who can meet indoors and out - which were introduced in the worst-affected areas of Northern Ireland last week, including Belfast, became law on Wednesday.

Breaches are punishable by a fixed penalty fine beginning at £60 and rising to £960.

The North’s Chief Scientific Adviser, Professor Ian Young, warned on Wednesday that hospital admissions had been rising in the last seven days, and the number of Covid-positive inpatients was currently at the highest it had been since late June.

This, he said, “reflects the fact that a higher percentage of cases are being observed in the over-60s, who are at the greatest risk of severe illness.”

Meanwhile two more people in Northern Ireland have died with coronavirus, according to the North’s Department of Health.

Both were aged between 60 and 79. One of those who died was from the Newry and Mourne council area, and the location of the other is not known.

It brings the total number of coronavirus-related fatalities recorded by the department to 573.

In the last 24 hours to Wednesday, 129 people tested positive for Covid-19. There have been 8,631 confirmed cases of the virus in the North since the beginning of the pandemic.

In the last week, 641 new cases have been identified. Belfast has been the worst affected council area, with 168 new cases. In Armagh City, Banbridge and Craigavon 95 new cases were identified, with 72 in Antrim and Newtownabbey and 61 in Derry City and Strabane.

Almost two-thirds of cases identified in the last week have been in those aged under 40. People aged between 20 and 39 accounted for 264 new cases, while there were 130 cases in those aged 19 and under.

Twenty-one people with coronavirus are in hospital in the North, and three are in intensive care. There are outbreaks in 25 care homes.