Kevin Murray, known as ‘Flat Cap’, had been diagnosed with motor neurone disease 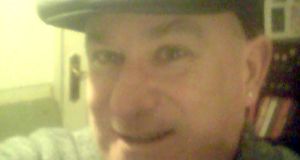 The death has occurred of Kevin Murray, the Tyrone man who was suspected of involvement in the Regency Hotel murder of David Byrne, a member of the Kinahan criminal gang.

Mr Murray (47), died in his home town of Strabane on Wednesday night in the care of his father, mother and sister, according to the local parish priest Fr Declan Boland who administered to him over recent months.

Mr Murray suffered from motor neurone disease and was in the late stages of the illness when he died.

He was brought to a hospice in Derry for a period, but returned home to die in Strabane. He is also survived by a son and a daughter.

Mr Murray was suspected of involvement in the murder of David Byrne at the Regency Hotel in Dublin in February last year. In the attack, men dressed as gardaí opened fire with automatic weapons during a boxing weigh-in killing Mr Byrne.

The murder, which was part of the Kinahan-Hutch gangland feud, triggered a string of other murders.

Known as Kevin “Flat Cap” Murray, he was arrested in September in connection with the Byrne murder.

Gardaí alleged that Mr Murray could be clearly identified from photographs and CCTV footage at the Regency Hotel. He was arrested under a European Arrest Warrant issued by authorities in the Republic.

Mr Murray faced extradition to the South but in May this year, a Northern Ireland court decided that he was too ill to stand trial in the Republic.

The court was told that Mr Murray was diagnosed with rapidly deteriorating and terminal motor neurone disease, and he had a short time to live.

Judge Patricia Smyth said she was satisfied “the only appropriate course I can take is to discharge the requested person”.

Fr Boland said Mr Murray’s funeral will take place from the Church of the Immaculate Conception in Strabane after 10am Mass on Saturday.