Surprise at timing of Pat Hickey’s legal threat against OCI 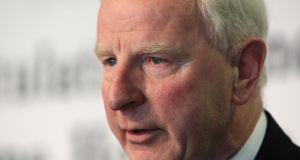 Two and a half months after his arrest, Pat Hickey remains in Rio, not under house arrest, but having surrendered his passport under the conditions of his temporary release, he is not permitted to leave Brazil. Photograph: Billy Stickland/Inpho

If the timing of Pat Hickey’s injunction threat against the Olympic Council of Ireland (OCI) isn’t surprising enough, then the nature of it certainly is.

From the moment Hickey stepped aside as president of the OCI pending the outcome of the various inquiries into his alleged involvement in the Rio Olympic ticket-touting scandal he has claimed there was “no substantive proof of any wrongdoing on my part”.

Only now Hickey has threatened legal action against his own executive committee of the OCI to prevent them from proceeding with this inquiry, being carried out independently by Grant Thornton, into the mishandling of the ticketing arrangements.

According to a statement issued by the OCI following a meeting at their offices in Howth on Wednesday night, Hickey had earlier this week threatened to make an application to the High Court for an injunction preventing the completion of the review.

As a result, they said: “The Grant Thornton review into ticketing arrangements in Rio will be postponed and completed only following the conclusion of criminal proceedings against Mr Pat Hickey in Rio.

“This decision was taken following the receipt of a letter from Mr Hickey’s lawyers this week in which he threatened to make an application to the High Court for an injunction preventing the completion of the review.

“The executive committee has decided not to incur the very significant additional cost of defending any such legal proceedings.”

Why Hickey has waited until now to object to any potential findings of that inquiry is not entirely clear, although it does come against increasing uncertainty about when, or indeed if, those criminal proceedings against him in Rio will be concluded.

It also leaves the OCI in an increasingly uncertain position. It was confirmed on Wednesday night that another member of the executive committee, Ciarán Ó Catháin, also a director within the OCI, had resigned from his position.

It’s unclear whether or not this was related to Hickey’s threatened court injunction, but Ó Catháin was part of the OCI’s three-person crisis management sub-committee set up to lead the various inquiries into the Olympic ticketing arrangements.

A former president of Athletics Ireland, Ó Catháin is also president of the Athlone Institute of Technology (AIT), a role he has held since 2000.

The OCI meeting also confirmed that an egm has been called for January to elect a new executive committee.

Effectively, there are now three inquiries running parallel: the Grant Thornton review being carried out on behalf of the OCI, the non-statutory State inquiry being conducted by former High Court judge Mr Justice Carroll Moran, and the Brazilian criminal inquiry in which Hickey has been directly implicated.

Hickey was arrested in Rio on the morning of August 17th and later charged with ticket-touting – termed as “ambush marketing, theft, tax evasion, money-laundering and criminal association”.

If found guilty, Hickey could be facing up to seven years in jail but a person serving a custodial sentence for such offences in Brazil would be rare.

Two and a half months on, Hickey remains in Rio, not under house arrest, but having surrendered his passport under the conditions of his temporary release, he is not permitted to leave Brazil.

He’s staying at an apartment in the fashionable Leblon Beach district, paid for by the OCI, with a 10pm curfew, and an order to report to a special Olympic court on the 20th day of each month.

Crucially, perhaps, the OCI indicated last week that the Grant Thornton inquiry, which was due for completion on November 15th, would then “be sealed and passed by Grant Thornton directly to Mr Justice Moran to consider as part of his non-statutory inquiry”. It said that the executive committee had at no point “had sight of the report”.

No one within the OCI, in other words, was due to see or review the report, which may or may not have had something to do with Hickey’s threat of legal action. The Grant Thornton inquiry was specially charged to review the appointment of Pro10 as the OCI authorised ticket resellers in Rio, and any potential links with THG, which had handled the OCI ticketing at the London Olympics but was not authorised to do so in Rio.

That Grant Thornton inquiry was commissioned by the OCI executive committee on August 26th, a week after Hickey was arrested in Rio, and according to the OCI at the time, “submissions will be invited from athletes and their families on their experience of ticketing allocation and availability arrangements for Rio 2016”. Up until now Hickey’s legal team had no issue with that.

This development also comes against an increasingly fractured OCI executive. Last week saw the resignation of second vice president John Delaney and honorary treasurer Kevin Kilty, days before the remaining executive committee members (now numbering 10 from the original 13) met at their offices in Howth to discuss the findings of a Deloitte report, which identified several failings in the organisation’s governance and management.

In the meantime, the non-statutory State inquiry into the ticketing scandal, which began on September 19th, has also been delayed due to time issues. Minister of State for Sport Patrick O’Donovan confirming on Wednesday that Mr Justice Moran “has indicated that this timetable may be ambitious and some delay is anticipated”.

According to the terms of reference of that inquiry, on its completion, the judge can then decide to open a full commission of investigation into the Olympic ticket trail. It would also examine all “stated policies, procedures, processes and practices adopted by the OCI (including its subsidiaries and/or agents) governing the receipt, distribution and sale of tickets allocated by the IOC to the OCI for Summer and Winter Olympic Games (including London 2012 and the 20144 Winter Olympics in Sochi).”

The OCI executive committee added in its latest statement that they had “restated its commitment to continuing full co-operation” with the Moran inquiry.

Last week, lawyers acting for Hickey also lodged an application with the Rio public prosecution for the return of his passport, citing health concerns for the 71-year-old, so that he could return home. There is still no date for his court hearing, a process that could take up to 18 months.

All this also follows the draft publication of the Deloitte report, seen by The Irish Times last week, which highlighted inadequate audit functions and a lack of any strategic plan, and suggested the OCI had “limited or no information” on “managing conflicts of interest, behaviours and ethics and roles and responsibilities”.

According to the OCI statement, the completed Deloitte report will be issued to OCI member federations next week in advance of January’s egm.

For now, however, a part of that reform has been stalled, as Hickey turns a legal challenge on to the inquiry which for a while at least he’d been happy to let proceed.