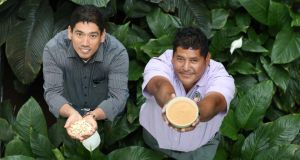 Irish supermarkets lag far behind their European counterparts when it comes to supporting Fairtrade products, the charity’s director, Peter Gaynor, said yesterday as Fairtrade Fortnight got under way.

Half of all bananas sold in Switzerland carry the Fairtrade mark, while the corresponding figure in Ireland is 7.7 per cent.

Mr Gaynor said Lidl accounted for 44 per cent of all Fairtrade certified bananas sold in Ireland. “They are showing the way, and if Lidl can do it why can’t the other retailers do more?

“The companies with the greatest power to harness our spending power to help lift people out of poverty are the retailers – and in Ireland they seem either blissfully unaware or indifferent to both the opportunity and responsibility to do so.”

Rose market
In Germany sales of Fairtrade roses account for more than 30 per cent of the total rose market, while in Ireland the figure is closer to 1 per cent. “I don’t know what it is about the Irish retailers. It seems to be a ‘tick box’ exercise for them. They think if they have a product or two on the shelf that covers the Fairtrade zone.”

Sugar cane farmer Alfredo Ortega from Belize and Alex Flores from a cashew nut co-op in El Salvador are travelling around the State this week talking to schools and community groups about Fairtrade.

Mr Ortega works with the Belize Sugar Cane Farmers Association and Tate & Lyle buys some of their produce. He said it had been challenging for farmers to meet the various standards required by Fairtrade but it was worth it. “It has brought benefits to the farmers, to the families of the farmers and the community.”

Alex Flores works with the Aprainores Cashew Nut Co-op, set up to provide a living for former combatants in El Salvador’s civil war. He said it faced a lot of problems initially and would have closed down if it was not for the support of Fairtrade, Equal Exchange and Irish Aid. The cashew nuts are stocked under the Equal Exchange brand in health food shops here.

“Fairtrade is not only a way of making a lot of money by selling at good prices...We have been educated by the Fairtrade system.”

For details of the Fairtrade talks see fairtrade.ie

1 No obvious signs of injury on remains of McGinley children
2 Patient advocate on HSE board resigns in protest at ‘tokenistic’ treatment
3 Fine Gael to stress economic warnings as campaign enters crucial week
4 Plenty of politicians’ promises, but what about these ideas to help consumers?
5 Coronavirus: death toll rises to 81 with nearly 3,000 confirmed cases
Real news has value SUBSCRIBE