Stunning image of surfer in Co Sligo up for major award

Surfer Tom Butler rides a big wave in Mullaghmore, Co. Sligo - a photo of which is now up for the US$14,000 top prize in the Best Barrel Category at the 2016 XXL Big Wave Awards. Video: Ian Mitchinson 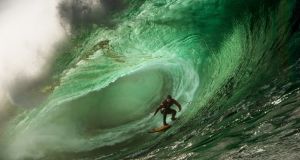 This stunning photograph of Tom Butler deep in the tube at Mullaghmore in Co Sligo is in the running for a major surf award.

Taken by South African Ian Mitchinson last October, it is among the final five photographs vying for the $14,000 top prize in the Pure Scot Barrel of the Year category at the 2016 WSL Big Wave Awards, the winners of which will be announced on April 23rd in Los Angeles.

Fellow South African Frank Solomon has been nominated in the Billabong Ride of the Year category, which carries a top prize of $93,000 for the surfer and $9,000 for the videographer, for a wave the same day at Mullaghmore. Captured on video by Irish man Peter Clyne, it was his first ever ride at the world-renowned big wave spot.

Mr Mitchinson and Mr Butler are part of a tight-knit crew of surfers and photographers chasing huge swells off the Irish coast. “We live on the fringes of society in Donegal chasing waves without really making any money doing it, but we go to the extremes to be amongst the most insane waves in the world that come to Irish shores each winter,” Mr Mitchinson said.