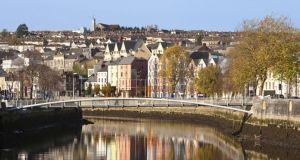 The chairman of a specially-appointed local government review group in Cork has said there is “almost universal” agreement among stakeholders to create a Metropolitan Cork with a population of around 250,000

The chairman of a specially-appointed local government review group in Cork has said there is “almost universal” agreement among stakeholders to create a Metropolitan Cork with a population of around 250,000, but the structures have yet to be finalised to accommodate such an entity.

Alf Smiddy was appointed in January by Minister for the Environment, Alan Kelly to chair the review group to examine the Cork city boundary with a view to either extending it to encompass a larger metropolitan area or merging it with Cork County Council to create one authority.

Now in a progress report, Mr Smiddy said it was clear from the work of the group that there was “an almost universal desire in support of the creation of a much larger metropolitan area in Cork to take in a population which could extend from 230,000 up to 290,000 citizens”.

“The entire Cork region could either be governed strategically by a single unitary regional authority with a number of key divisions including a large metropolitan structure or alternatively by two separate authorities,” said Mr Smiddy.

The review group which is set to report to Minister Kelly by September has met Cork City Council and Cork County Council as well as other stakeholders such as the IDA, Enterprise Ireland, Failte Ireland, Cork Chamber, the Cork Business Association, UCC and CIT.

“Cork (city) is being disadvantaged by the lack of development land and population within its boundaries,” said Mr Gavin, adding that many communities such as Togher and Douglas were divided by the city boundary and an extension would reduce the need for duplication of services.

It’s understood that the largest revenue earning division within Cork County Council is the Southern Division which surrounds the city and includes areas like Glanmire, Blarney, Ballicollig, Carrigaline, Passage and Ringaskiddy, which are home to many industries.

Amid reports of disagreements between the two local authorities regarding the exchange of financial information, Mr Smiddy appealed to all parties to continue to assist the review group to achieve the best outcome for all the citizens of Cork, both city and county.

“I have no doubt that tensions may emerge between the respective authorities or other stakeholders which will no doubt begin to play out and manifest itself in the media,” said Mr Smiddy.

“Our citizens are at the heart of this local government review and I would especially urge both local authorities and stakeholders to seriously work closely together – ‘hand in glove’ – during the remaining months of this review.

“It is absolutely futile to do otherwise and regardless of what we recommend, the leadership of both councils need to continue with their great work and collaboration and demonstrate publically that they can, at all times and in all circumstances, work together as we create and new and exciting future for Cork.”